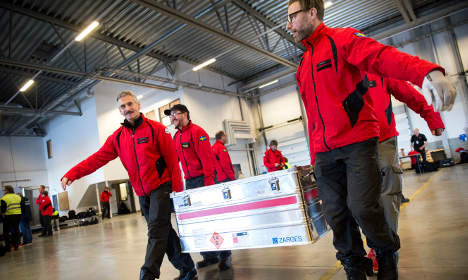 A Swedish search and rescue team has taken off from Örebro airport. Photo: Kicki Nilsson/TT

Swedish aid workers took off from Örebro airport in central Sweden at 10.40am on Tuesday, set to stop in Amman, Jordan, and Karachi, Pakistan, en route to Nepal. They followed hot on the heels of a freight plane which flew out at 9.19pm on Monday evening and is currently waiting at the airport in Baku, Azerbaijan.

But both planes have yet to receive permission to land at the airport in Kathmandu, press spokesman Marcus Årskog at the Swedish Contingencies Agency (MSB) told The Local.

“There's limited opportunity to land. It's a very small airport and there's a worldwide stream of relief effort units on their way to Nepal, so there's a lot of traffic which puts pressure on the airport. We're waiting in the queue and are working with the contacts we've got to get prioritized,” he said.

He told The Local it is unclear when the Swedish planes will be able to land, but when they do they will face a huge task following the earthquake which devastated the region on Saturday.

“It is difficult to assess the rescue work in advance, but as soon as our teams land it's about finding a place to set up camp and get to work as quickly as possible,” said Årskog.

The Swedish teams are not the only ones waiting to land in Nepal. A Norwegian rescue team is also reported to be stuck in Baku, along with several other international relief efforts.

Only 8 spaces for large aircraft make for long waits to land at #Kathmandu. #NepalEarthquake http://t.co/y9fkbqWvIM pic.twitter.com/xKgxYcpMSX

The Swedish International Development Cooperation Agency (Sida) has allocated 13 million kronor ($1.5 million) to the MSB operation, which consists of logistics, coordination, management, communications and assessment experts – reduced from some 60 to 43 workers after an initial needs evaluation.

“We want to be as self-supporting as possible so that we don't put any strain on local relief efforts,” said Årskog. Thousands of people have died in the Nepal earthquake. Photo: AP Photo/Bernat Armangue

The 7.8 magnitude quake destroyed parts of Kathmandu's historic city centre and was felt as far away as Bangladesh and Tibet. The official death toll has grown rapidly since the first reports of the tragedy and was at 3,351 on Monday evening, according to the United Nations, which has made an urgent call for international help.

But senior figures in Nepal have cited various figures from 3,000 to 6,000 and reported fatalities are likely to increase as search and rescue teams reach remote areas. Most of the deaths have been recorded in Bhaktapur, Kathmandu and Lalitpur.

The tragedy has sparked a massive international relief effort, with the European Union making €3 million available and several countries deploying expert teams and emergency aid to Nepal, including Denmark, France and the United Kingdom.

Another plane chartered by Swedish-Finnish telecoms giant Telia Sonera travelled to Nepal on Monday morning to help the country's largest mobile phone operator, Ncell – which is 60 percent owned by Telia Sonera – keep the network in operation.

Around 150 Swedes are believed to be in Nepal, but none have been reported dead.

KIRUNA
‘It sounded like a bomb’: 300 mine workers inspect damage left by Swedish record earthquake