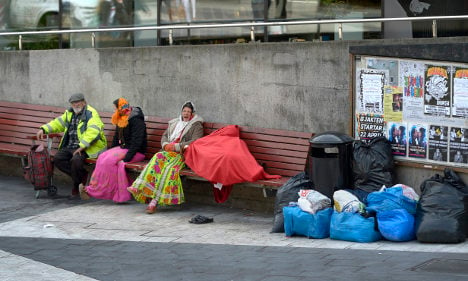 From Vellinge in southern Sweden to Kiruna in the far north, there are now begging EU migrants, mostly from Romania and Bulgaria, across the country.

According to a survey by Swedish broadcaster SVT, a total of 3,400 to 4,100 were living in Sweden just after Easter. This compares with an estimated 800 to 2,000 reported in a similar study a year ago.

241 of Sweden’s 290 municipalities responded to a questionnaire sent out by the news network, which suggests that the total number of estimated migrants could be even higher if it were to include responses from the missing regions.

Martin Valfridsson, Sweden's debut national coordinator for vulnerable EU citizens, who started in the freshly-created post in February, told the broadcaster that its figure sounded “accurate” based on his experiences.

He has spent the past few weeks meeting municipalities and charities around the country as part of his efforts to better coordinate cooperation between the different groups that are currently providing aid and assistance to poor EU migrants.

SVT's study suggested that there were now beggars in at least 40 municipalities where there were no migrants from Romania or Bulgaria a year ago, including Arvidsjaur in northern Sweden and Saffle Värmland.

Sweden's long-term vision is to cut the number of beggars moving to the Nordic nation, while assisting those who have already made the journey.

"Beggars cannot uphold the same level of welfare as those who are resident in Sweden, but we should seek to use the resources we have here in the most efficient way to help them as much as possible," Valfridsson told The Local earlier this year.

Most of the beggars are members of the Roma community – one of the EU's largest minority groups – and arrive as EU tourists under the right to Freedom of Movement. Many live in tents or caravans and make a living by asking Swedes for money outside shops and underground stations.

Sweden and Romania have said they will cooperate and work against fighting poverty within the Roma community, following key talks between ministers from both countries in the Swedish capital earlier in January.
"Local authorities in Romania and Sweden will cooperate and we will prepare projects to achieve common goals for employment and social welfare in both our countries," promised Rovana Plumb, who is Minister for Labour, Family, Social Protection and the Elderly in Romania.