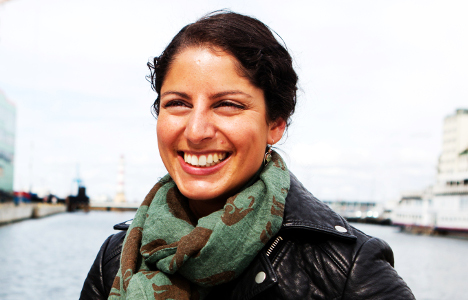 Decades of war, corruption, piracy and poverty have left parts of East Africa torn apart and lawless. But even the looming presence of al-Shabaab, the Somalian terrorist organisation now affiliated with ISIS, has not deterred Kara De Kretser from moving to the region to offer the experience and skills she gained from a master’s programme at Malmö University.

UNOPS supports agencies and governments in troubled areas, sometimes by helping to procuring critical supplies, but often through building essential infrastructure. Much of Kara’s work is focused on Somalia, where, following the long period of conflict, the physical infrastructure and many government buildings are in a dilapidated condition.

“It is very challenging for a government or ministry to function efficiently when they lack offices suitable for future needs. Establishing police headquarters, new ministry buildings and prisons is all aimed at strengthening government institutions, improving security and justice, and above all, developing national capacity,” says Kara.

She aims to travel into Somalia later this year to assess the situation on the ground – where the threats are very real.

In January, al-Shabaab carried out a fatal suicide car bomb attack near Somalia’s Mogadishu International Airport compound, where UN staff are based.

“We live in a bit of a bubble in Nairobi,” she says.

“It’s easy to get accustomed to life here, but it is always a strong reminder when you land back home, and you reflect on the differences. For instance, it is very normal practice in Nairobi to go to a shopping centre and oblige security personnel as they search our cars for bombs or other weapons – it is very easy for that to become our norm.”

The shootings at the Westgate Shopping Mall in 2013 which left 71 dead, and more recently the appalling atrocity at Garissa University College which killed 152, put Kenya in the spotlight as fundamental terrorists attacked soft targets.

“Kenyans are very resilient, as are the members of the large expat community here in the country. But it is heart-breaking when you wake up to hear this on the news. You may not panic but you do ask yourself is it safe to be here; do I need to think of where I am going; do I need to lay low? But to live in fear would be to give these terrorist groups exactly what they want.” “Universities are meant to be places where you feel safe.”

The latest attacks are a stark reminder of how privileged Kara feels coming from Australia and living and studying in Sweden. As the news of the attack emerged from Garissa, she considered her time at Malmö University and was struck by the contrast.

“In two countries on the same planet, one is a place where you go to learn, to challenge the norms, to express your creativity and enjoy your independence in a safe haven,” she notes.

“And in another place, students are trying to empower themselves through education, get a good job and contribute to the socio-economic development of their country. And then this happens to them.”

Kara’s own university career began with studying law and arts in Australia, before moving to Sweden. Having worked in legal policy in Australia and corporate law in Sweden she realised her future lay elsewhere.

Seeking “something practical” which allowed her to step outside of the classroom and learn through experience, Kara started her master’s degree in Leadership for Sustainability in 2011.

“My master’s completely changed my career path,” she explains.

As part of the one-year course, Malmö University arranged field trips to Nepal and Cambodia. This spun Kara into the world of international development – and into her current role at UNOPS.

“I imagine when people think of the UN they don’t necessarily think of us designing and building new prisons, hospitals or ministry buildings, but this all contributes to rule of law, development, improved security and conflict prevention in the region.”

This is what will bring long-term change, she points out.

“It is important for people to know that the international community is committed to supporting their rights as individuals, at the same time as we are supporting development efforts at the higher level.”

While working at the UN, and in the international development sector generally, is usually described as incredibly rewarding, it can also be emotionally taxing. But Kara points to the leadership and project management skills she acquired at Malmö University as being a solid foundation for the work she is doing in Kenya.

“Each day I am able to use my planning and organisational skills, as well as the innovative problem-solving mindset that was fostered and encouraged during my master’s studies,” Kara explains.

“Malmö University encourages its students to think outside the box, to challenge conventional norms and to get hands-on experience through field trips, practical assignments and learning beyond the confines of the classroom.”

“I wouldn’t be where I am now without that encouragement and opportunity.”

Want to think outside of the box? Want to study outside of the classroom? Want an extraordinary career? Find out more about Malmö University’s Leadership for Sustainability, Master's Programme (One-Year).