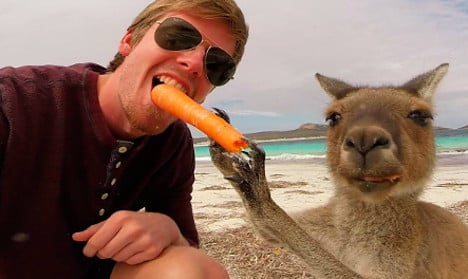 Dennis Karlsson was walking with several friends around Lucky Bay in southern Australia when he turned around to discover that a kangaroo had its nose in his backpack, which he had left elsewhere on the beach.

He ran back to the spot and wrestled his belongings away from the pouched animal, including a bag of carrots he had bought as part of his lunch.

But thinking that the kangaroo looked friendly, he decided to take a photo with the creature, a snap that has since gone viral in Sweden and even been dubbed “selfie of the year” by Swedish tabloid Expressen.

“I took it for the same reason I take my other photos. I got a crazy idea and I wanted to see if it worked. It kinda did,” Karlsson told The Local.

The 26-year-old who is taking a break from running a photography business in Lund in southern Sweden to travel the world, posted the picture on his personal Facebook page, before it was picked up by Swedish media.

He told The Local that he wasn’t bothered about the media “fuss” over his photo.

“I'm not really a private person. I don't really care what other people know or think about me,” he said.

But he added that he would be delighted if his photo were to win any official selfie contests, joking: “I hope the prize will be carrots”.

Karlsson is the second Swede to hit the headlines this month for taking photos with dangerous creatures.

Victor Ferm, 20, from Helsingborg in southern Sweden, recently moved to Cairns on Australia’s east coast, where he is making a name for himself diving and taking photos of sharks.

“My parents and loved ones are not particularly happy about my profession,” he told Sweden’s Expressen.

“Mum usually always calls and scolds me when I take a selfie with a great white shark,” he added.