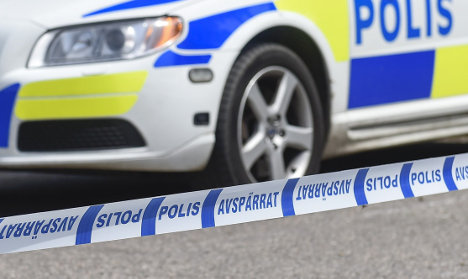 A Swedish police car. Photo: TT
The girl, 13, says she was raped by a man she did not recognize, who attacked her on her way to school at around 8.30 am.
The alleged assault took place just a ten-minute walk away from the pupil's street. After managing to escape from her attacker and return to her home, the girl's mother alerted police at around 10am.
A police spokesperson for the region, Björ Blixter told the TT news agency that a dog trained to sniff out sperm had been sent to search the surrounding area, while the girl was set to be examined in hospital.
He added that officers were searching for "an unknown man who could be a few years older" than the young teenager, but did not currently have a suspect in mind.
Reports of the apparent crime went viral in Sweden on Wednesday, with the story among the most shared on social media.
Sweden has one of the highest rates of reported rape in Europe. In 2013, almost 5,900 cases were reported to Swedish police, according to the Swedish National Council for Crime Prevention.
The high figures are often attributed to greater gender equality in the Nordic nation, which encourages more victims to come forward, as well as a relatively wide definition of rape.