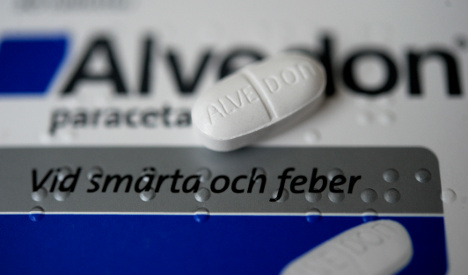 From November Alevedon will only be available from Swedish pharmacies. Photo: Jessica Gow/TT

The decision to ban the painkillers comes after reports of a spike in cases of accidental poisoning and overdoses.

In a study conducted by Läkemedelsverket, the government authority responsible for the approval and control of medicine, the number of poisoning cases was found to have doubled between 2000 and 2013.

In particular, there was a clear rise in poisonings in 2009, which coincided with the government's decision to allow the painkiller to be stocked in supermarkets and convenience stores.

According to Rolf Gedeborg, researcher at Läkemedelsverket, many of the poisoning cases amounted to self harm.

“We see a clear increase in the number of poisoning cases that are essentially self-destructive acts, namely impulsive acts where you know there is a connection with availability. When availability increased, so did this problem.”

Gedeborg denied that there was a connection between the amount of paracetamol in the tablets and the spike in poisonings.

“It’s a misunderstanding that there could be a direct link between the amount of paracetamol normally used and the number of poisonings.”

“The absolute majority of normal usage is no problem, and it's not as though a person would be more likely to poison themselves because more people are using paracetamol normally.”

Gedeborg said that the ban which will be imposed on November 1st, is intended to have as "little effect as possible on the normal use” of the tablets.

Although ordinary tablets will be banned, suppositories, solutions, orally disintegrating tablets and effervescent tablets will still be available outside of pharmacies.

However, not everyone agrees with the supposed link between the painkillers’ availability and the poisoning cases.

“You haven’t checked where people bought or got hold of their paracetamol,” Karin Brynell, CEO of the Swedish Grocers' Federation, Svensk Dagligvaruhandel, told TT.

“During the same period the increase occurred, the number of pharmacies increased, as well as the opening hours. And pharmacies have no age limit to buy paracetamol – but we do.

“Stopping sales means little for the industry economically. Those primarily affected are rather consumers in rural areas. Those who are far away from the nearest pharmacy will suffer the most.”

Alternatives to the ban suggested by Brynell include imposing an 18-year limit on pharmacies and smaller packages.