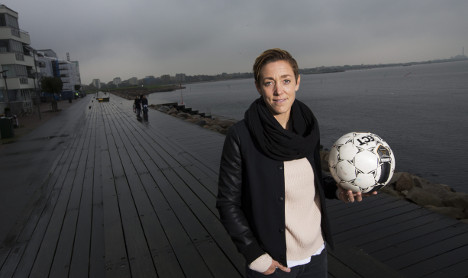 Midfielder Sjögran, 38, has played 209 times for her country and will retire after the tournament in June and July, to become sporting director of her club Rosengård.

"We've talked about it for a long time and the decision was easy to make: after the World Cup, my career will be over," she told the TT press agency.

Sjögran spent her entire career in the Swedish League, apart from a season in the United States in 2011.

She was at the centre of controversy in 2013 when the Swedish football federation presented a Volvo car to Anders Svensson, who was the most-capped player in the men's game, even though Sjögan had already played more times for her country and received nothing.

Swedish striker Zlatan Ibrahimovic immediately waded into the debate raging in Sweden when he said dismissively: "She can have a bike with my autograph on it and that's it. You just can't compare men's and women's football.”

The Swedish Football Association defended the blunder at the time saying they never meant to overlook Sjögran and that the recognition for Svensson was because he was due to retire whilst Sjögran was still playing.

Sjögran herself initially kept quiet about the incident but was later moved to tell Swedish news network SVT: "If they honoured him, they should honour me.”

Sweden are one of the top sides in women's football and have qualified for every FIFA Women's World Cup so far.

Unlike in other European countries, the results of women's matches in Sweden are regularly reported on mainstream television bulletins.

The 2003 Women's World Cup final was the second most watched event in Sweden that year.