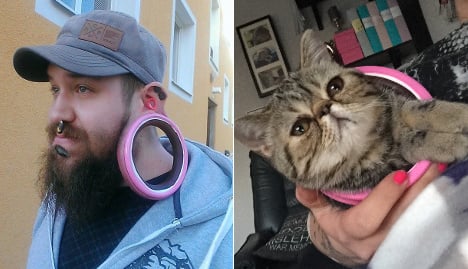 Officially, the world record for the largest non-surgically made ear-piercing is held by Hawaiian Kala Kaiwi, whose piercings measure 109 milimetres.

But with lobes measuring a whopping 130 milimetres (13cm, 5.1 inches), Swede Oskar Klasson is pretty sure that he’s the true world record holder, although the 23-year-old from Mariestad, western Sweden, isn’t interested in setting a new official record.

“I don’t stretch my lobes because of that,” he tells The Local.

Klasson says his obsession with ear piercing began when he was still at school.

“I started when I was 14 years old because I thought it looked really cool. Over the years, I learned about why different tribes in the world do it for spiritual reasons." Since then, he’s been stretching his piercings at a rate of about one millimetre per month. But, of course, having 130 milimetre holes in your ears does have its downsides.

“When I’m jogging, they can slap my face – but then I just tuck them away,” he admits.

When he’s not busy stretching his lobes, Klasson works as a teaching assistant at a Swedish pre-school, where his curious five-year-old pupils are always fascinated by his piercings and ask questions such as: “Can I put my arm in there?”

Overall, though, their response has been positive. “Children are really open-minded,” says Klasson.

Unfortunately, not all of the children’s parents share the same mentality.

“One kid said his mum told him that I was disgusting. I said everyone has a right to think differently, but you don’t always have to say it. He understood what I meant.”

In addition to his very young fans, Klasson has over 4,000 followers on Instagram, where he regularly posts pictures of his piercings. He also has a Facebook piercing group with over 16,000 members and was featured in major Swedish tabloid Expressen this week.

“I get really different reactions – from ‘Wow, that’s really cool and inspirational’ to ‘You’re gross and shouldn’t be on the internet’,” he says.

Klasson says he’s also had bad reactions from people in his local area. “An old lady at the local store once told me I could never be a good father because of my looks,” he says. Klasson has been stretching his lobes for over nine years. Photo: Private

But he’s not discouraged. Currently, the piercings are big enough to put his own arm through; even his pet cat Mocca fits through the holes.

And he’s not going to stop there. “I have plans to make them way bigger – maybe they’ll reach my knees one day.”