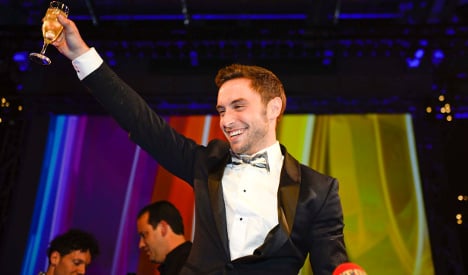 Excitement is mounting for the finals of the Eurovision song contest this May, where Swedish singer Måns Zelmerlöw will be representing Sweden with his hit ‘Heroes’ (see below), which was overwhelmingly chosen at Melodifestivalen earlier this year.

The contest will be held in Vienna this year but fans back in Sweden need not despair as the star is set to make another appearance at the Stockholm singalong event Allsång på Skansen later in June.

Zelmerlöw himself hosted the programme between 2011 and 2013 but this year, but will now be attending as a performer following his global success.

“He has a large and extensive summer tour, so it's been a little difficult to get it together. But he’s ready for cooperation,” a source told Sweden’s Expressen.

As well as the Eurovision Song Contest, the star is also reportedly busy finishing his album as well as helping organize a festival in Båstad this summer.

Since he won Melodifestivalen in March he's also been flying around Europe to promote his upcoming act.

SVT, the Swedish network which is set to broadcast the much anticipated event in Stockholm, known as Allsång på Skansen, would not comment on who else might show up.

Previous performers have included Ricky Martin and James Blunt.“Not everything is clear and I cannot comment on the artists until they are presented at the press conference,” Mathilda von Essen, a press officer for the programme, told Expressen.

Allsång på Skansen is a traditional singalong marathon where people of all ages gather for an open-air concert of professional performers, interspersed with old Swedish folk tunes. To find out more read our lowdown of the festival.

The first 2015 Allsång på Skansen will be broadcast on SVT on June 10th.

As Sweden looks forward to the upcoming Eurovision final on May 23rd, The Local has learned that the contest will not be including Swedish TV signer Tommy Krångh, who shot to YouTube stardom for his enthusiastic signing at Melodifestivalen this year.