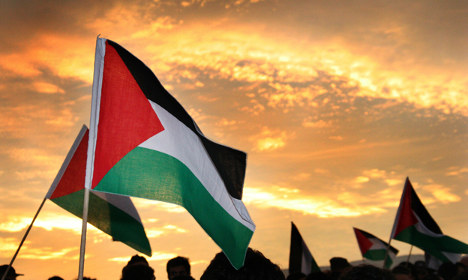 The Palestinian flag. Photo: Diego Sandeval/Flickr
After several youths in central Sweden's Örebro travelled to Syria and Iraq to fight with terror group Isis, a local high school decided to increase awareness about international terror groups in an attempt to prevent it from happening again.
The school enlisted the help of the Örebro police, which shared its internal material about recognizing terror groups. Among the documents was a page with flags of known terror groups – one of which was the Palestinian flag.
"The exact same symbol is used by the Abu Nidal Organization," Jonas Hysing, head of the police's tactical unit, told the Nerikes Allehanda newspaper.
"It's not unheard of that organizations do this – Muhammad's creed is on the Isis flag, for example, and that has nothing to do with terrorism."
He said that the police documents weren't inaccurate, and had been based on information from the National Counterterrorism Center in the US.
Local Green Party politician Niclas Persson said the fact that the listing was "truly unfortunate".
"It's important that this is corrected," he told the TT news agency. "The big problem is that people connect Palestine's fight for liberty with terrorism."
Despite the confusion, policeman Jonas Hysing said that the symbol wouldn't be removed, adding that officials may write extra text beside the symbol to explain that it can often be used in different contexts.