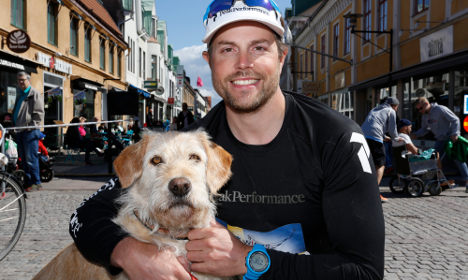 Arthur the stray dog, whose rescue from the streets of Ecuador by a team of Swedish athletes made global headlines last year, now lives with Mikael Lindnord and his family in the northern town of Örnsköldsvik.

The dog first befriended the 38-year-old and his extreme sports team members in November after Lindnord gave him a canned meatball in the rainforest as the four-person team took part in the Adventure Racing World Championship.

At times the team – known as Team Peak Performance – tried to get rid of their new member because they were worried about his safety, but Arthur refused to leave their sides. The love was mutual and Lindnord brought the homeless animal – who had by then already become a world celebrity – back home to Sweden later that month, with permission from the Swedish Board of Agriculture (Jordbruksverket).

After months in quarantine, Arthur has spent the past month-and-a-half enjoying life as a family dog. But once an adventurer, always an adventurer. On Sunday he took part in the Swedish version of global charity race Wings for Life World Run, organized in Kalmar in southern Sweden.

Arthur and Lindnord ran 18 kilometres in total, and the canine athlete showed no signs of nerves.

“Arthur was asleep at the starting line with only two minutes to go. When there was just one minute left I thought I had to wake him up, so I lifted him up and told him he had to wake up. But when they fired the starting gun he was – boom! – immediately ready to go,” a smiling Lindnord told Swedish tabloid Expressen after the race. Wings for Life World Run was organized in 35 locations worldwide on Sunday – for example Dublin, Taiwan, Cape Town and Stavanger – with more than 100,000 participants in total. All funds raised will go to spinal cord research.

“We did this for a good cause, not to win. Arthur has received a lot of attention and we thought that if we can contribute to get some PR and be there to support Wings for Life, we want to do that,” said Lindnord.

Fans were delighted to see the world famous street dog and did their best to cheer him on.

“Everybody shouted 'go Arthur' the whole way. The audience carried us, it was great,” Lindnord told Expressen and promised that the four-legged champion would not go unrewarded.

“He likes dried beef a lot, so we'll try to get hold of some to give him,” said Lindnord.

The homeless animal is used to the attention by now. Arthur even developed an international fan club last year, with news outlets including the BBC, USA Today, The Daily Mail and the Washington Post all reporting on the story.

And in Arthur's honour the team has launched Arthur's Foundation, a charity which campaigns for a change to the law in Ecuador to give more rights to wild dogs.

“We could not have imagined all this attention, not even in our wildest imagination. I went to Ecuador to try to win a world cup medal, not to bring home a dog. But some things in life you can't control. It's like we were meant to have Arthur," Lindnord told The Local back in March.