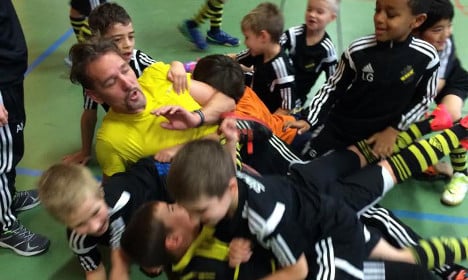 David Lynch and the players he coaches. Photo: TT
"Where are my socks? Where are my shinguards? Where's my jacket, Dad?"
These were the kinds of questions David Lynch's son Nima, 8, used to constantly ask his father.
Despite being fed up of running after his son, Lynch found himself packing the child's bag ahead of each football practice, doing his dirty laundry and spending weekends privately coaching Nima to help improve his skills on the pitch. All this in addition to formally teaching him at training sessions for his club side AIK Stockholm.
The result: one stressed-out parent and a kid who "got pissed, blew up and called his Dad the worst football coach in the world".
"I learned the hard way that what I was doing was a big 'no-no' and I could see that other parents at the club were going to even greater extremes," he tells The Local.
"In Stockholm, Gothenburg and Malmö, a kind of hovering helicopter parenting is a growing phenomenon. These parents want the best for their kids but they believe they have to take on fights on behalf of their kids."
"I think it's a big city thing. Maybe a ten-year-old ice hockey player in northern Sweden would be a bit more independent but that's not the case here in the capital."
Lynch, a former investment banker who moved to Sweden after tiring of London's hectic pace, sprung into action and worked out a strategy designed to see Nima and other budding soccer stars taking more responsibility for their hobby, and parents taking a step back from creating unrealistic expectations for their sons and daughters. The idea was to start making football fun again.
He created a 24 point list for mothers and fathers, with goals including: 'Make them pack and prepare their own kit bag', 'play football with them, where they want and when they want to', and 'encourage them, support them, but never ever shout out instructions' plus 'let them dream that they can be a Lionel Messi, but don't give them any expectations'. FC Barcelona's Lionel Messi from Argentina is one of the world's best players. Photo: TT
The list also focused on a peaceful attitude towards other clubs, a throwback to Lynch's childhood growing up in Glasgow, where fans of the city's two rivals Celtic and Rangers regularly ended up attacking one another.
"Here in Stockholm it's more a case of middle class Swedish blokes shouting at each other but it's not good for dads to tell kids that other teams are inferior. Celtic and Rangers got nowhere from fans hating each others guts," he said.
The list ended up going viral, scoring Lynch slots on primetime Swedish media programmes and sparking a strong debate on social media.
"Mostly the reaction has been really positive," says the 53-year-old who lives in Solna in northern Stockholm with Nima and his Iranian-born wife.
"US ice hockey clubs have adapted the rules and sent them round to parents, I've been invited to do talks at other football clubs outside Stockholm and I have just had lots of people coming up to me in the street backslapping and me and saying 'hey, that was brilliant!' or telling me that they are parents who have shared the list around."
Asked if he's experiencing a warm and fuzzy feeling as a result of his impact, he laughs: "I'm a Glaswegian. I'm not sure we have warm and fuzzy feelings! But I am glad it is working."
So is Nima aware of his father's new celebrity status?
"Oh my god, yes!" says Lynch.
"He likes it and it's much better at home now as Nima and I are sharing the workload a bit more when it comes to packing his kit bag."
Currently a freelance advertising copywriter and translator, Lynch says it would "of course be a dream" if his success led to a paid football coaching role or more media work linked to his sporting hobby.
But he said it would "go against every atom in his body" to accept private teaching offers or one-to-one mentoring for children.
"Even if I am making a name for myself that would just completely contradict what I put on the list".
For now he is content in his day job, which he says is largely down to Sweden's more relaxed approach to the working world.
"From what I can remember of London it was much more stressful and hierarchical," he says.
"Here the atmosphere is more laid back. You can be more casual with what you wear and everyone is entitled to share their opinions."
The approach seems to have a lot in common with Lynch's much-discussed parenting strategy.
"The most important thing I want to say is that Swedish parents need to take a step back, chill out and look at what they are doing – and just leave the kids to be kids".
David Lynch's advice to parents on how to raise young footballers
1. Make them pack and prepare their own kit bag.
2. Always be in time for training.
3. Make them clean their boots
4. Make them put their dirty kit in the wash
5. Tell them to give 100% at training and matches.
6. If possible, walk or cycle to training
7. Teach them how to tie their shoe laces
8. Play football with them, where they want and when they want to
9. Make them wear kit until it's falling apart. Then buy new kit.
10. Buy them new boots when they need them, not when they want them
11. Buy second-hand boots and save yourself a fortune
12. Teach them not to hate other teams.
13. Win or lose, love the game.
14. Respect teammates, the opposition, respect the ref, respect other team's coaches. If you don't teach them this, the coach will have to do it.
15. Let them dream that they can be a Lionel Messi, but don't give them any expectations.
16. Blaming teammates, blaming the ref, blaming anything is out.
17. Let them play football at home with a tennis ball .
18. Take them to football matches and let them watch the pros.
19. Tell them football is for fun. Training is for fun. If it isn't fun for them, talk to the coach/club or move to another club .
20. Watch football training videos on youtube and let them try out and perfect some of the moves.
21. Encourage them, support them, but never ever shout out instructions when they play on my team, or any team smile emoticon.
22. Play other sports .
23. If you are a football mum or dad, don't try to train your kid. Take them out, ask what they want to do and let them do it.
24. Tell them you love to watch them play.