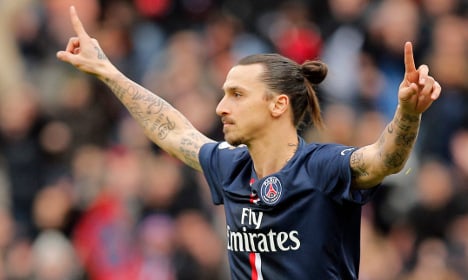 The Swede had a hand in both goals, notably playing the ball between Nantes' captain Oswaldo Vizcarrondo's legs to set up Blaise Matuidi's clincher on the half-hour.

Edison Cavani had pounced as early as the third minute after Ibrahimovic had sparked a goalmouth scramble with a snap shot.

And Vizcarrondo was left red-faced when Sweden's best striker in history produced the cheeky pass through his legs before he turned in a panic to see Matuidi race through and clip a slick finish round the onrushing Remy Riou in the Nantes goal.

The 33-year-old Swede was playing his first game since starting a three-match ban for a foul-mouthed rant at a referee in which he blasted France as a “shit country”. He was later suspended for four matches, subsequently reduced to three.

The row began when Ibrahimovic took exception to some of the decisions made by referee Lionel Jaffredo in a game against Bordeaux in March and cut a furious figure at the final whistle when he stormed down the tunnel.

"In 15 years, I have never seen such a referee. In this shit country, this country does not deserve PSG," the striker blasted in English at the final whistle.

The player later apologized for his outburst in a statement released after the game, saying: “My words were not targeting France or the French people. I was speaking about football and nothing else.”

“I was speaking when I was annoyed and everyone knows that at these moments you can speak without thinking,” he added.

READ ALSO: What could Zlatan have against France?

Sunday's 2-0 win puts PSG on 74 points at the top with Lyon three poins behind with three games to play.

Having already won the League Cup, and with a French Cup final to come against Auxerre on May 30th, the team are on track for a domestic clean sweep.

“We came for three points and that's what we're going home with. So congratulations to my players,” said PSG coach Laurent Blanc.

“I don't know if we'll end up champions but over the last five or six games we've been tough to play against.”

“It's all about concentration and determination to win the ball back. In matches where we were losing the ball, you saw players start to get at each other,” he explained.

It was PSG's sixth straight league win and their remaining fixtures appear eminently winnable – they must visit Montpellier and welcome Guingamp and Reims to the Parc des Princes, where they are unbeaten domestically in a year.