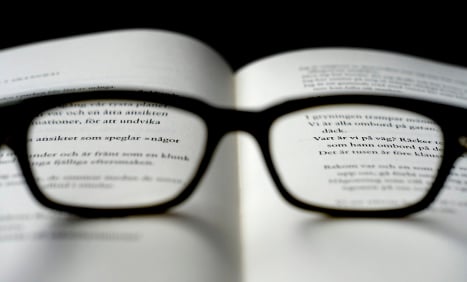 Glasses, the usual form of eyesight correction. Photo: TT
The course, which was scheduled to take place at a night school in Blekinge in southern Sweden, proposed that pupils could learn how to get better eyesight by participating in training exercises, including learning how to read upside down.
The teacher who was booked to teach it is an architect and has no previous training in opthalmology. But she claimed to have "healed" previous students suffering from eye problems such as astigmatism, according to an interview with regional newspaper Sydöstran.
Jan Ygge, an ophthalmologist and professor at Stockholm-based university, Karolinska Institute, told The Local that the idea was "pure quackery" based on "fake" science.
"It's not that a course like this is dangerous but it is terrible to be offering something with no scientific evidence to back it up," he said.
"We have actually got some student research on similar courses coming up. Students took this kind of 'alternative medicine' class and found no difference whatsoever to their sight."
The Blekinge college scheduled to run the course is part of ABF, which describes itself as Sweden’s largest adult liberal education association.
When contacted by The Local on Tuesday the organization said it was unaware of the locally-organized lessons. By lunchtime it had pulled the course from its online prospectus.
"The course has been cancelled, not because of the media attention but because the aim of the course obviously doesn't apply to our view of science or care," said Niklas Skeppar, a spokesman for ABF.
"Our local branch in Blekinge didn't have the proper information when agreeing to this study-circle…but we are an organization that arranges some 65,000 lectures and 100,000 courses every year, so even if an error like this is a bad thing, seen in the broader picture, it isn't a big problem for us," he added.