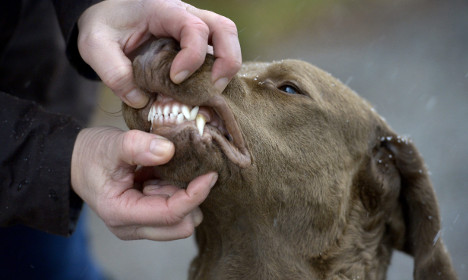 Not the Swedish dog in this case. Photo: TT
The 36-year-old, who has not been named by Swedish media, made extremely racist statements while he was standing outside a supermarket in Halmstad with his dog, on the west coast of Sweden last year.
He was heard calling on his animal to "get the nigger" and other racist phrases aimed at young people going in and out of the store.
The man was also spotted wearing a motor club vest where parts of the text had been replaced by the lightning bolt symbol used by the Nazi paramilitary group the SS (Schutzstaffel) during the Second World War.
On Tuesday, a court ordered him to carry out 120 hours of military service.
The maximum penalty for inciting racial hatred is two years in prison, or four years in the most serious cases.
According to regional newspaper Hallandsposten, the man was also convicted of serious gun crimes, having transformed a tear gas gun into a type of revolver.
Sweden's neo-Nazi organizations are declining in numbers, but their activity is growing in intensity, an annual report by Swedish anti-racist foundation Expo suggested in March.