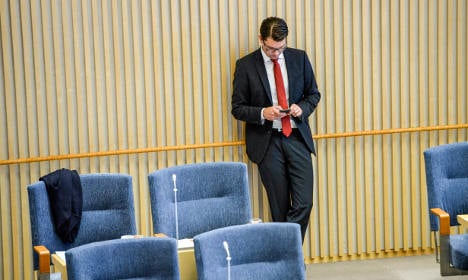 46 percent of all Swedish voters asked for a survey, commissioned by the Dagens Nyheter (DN) newspaper said that they wanted to end a parliamentary blockade against the Sweden Democrats and co-operate with the anti-immigration party on issues where there is common ground.

This compares to 60 percent of Christian Democrat voters and 50 percent of Centre Party voters. Of Sweden's largest opposition party, the Moderates, 55 percent wanted to break the Sweden Democrats' isolation in parliament. But only 38 percent of the fourth party of the centre-right Alliance coalition, the Liberals, thought their party should co-operate with them.

On the centre-left side, the corresponding figures were 32 percent of the Social Democrats, who are ruling the country in a coalition government with the Green Party, of whom 29 percent said they wanted to end the blockade. Only 24 percent of Left Party voters said they wanted other parties to work together with the Sweden Democrats.

Compared to a similar survey in autumn 2014, more Moderate and Centre Party voters expressed a positive view of cross-party co-operation with the nationalist party, according to DN.

“Since September there has been some movement among right-wing voters where fewer agree on the line that the parties ought to do everything to isolate the Sweden Democrats,” said David Ahlin, head of public opinion at Ipsos.

The nationalist Sweden Democrat party is Sweden's third-biggest party, after scoring a record 12.9 percent of the vote in last year's general election. But the approach taken by the other parties so far has been to avoid giving them any influence.

Nonetheless, they are the kingmakers in parliament and were involved in sparking a government crisis shortly after September's vote after they helped block the centre-left coalition's budget proposal.

The incident prompted the other parties to sign the so-called 'December Agreement', in which they pledged to let the ruling government's budget proposal through parliament, avoiding a similar situation in the future.

And for the electorate on the whole, the number of voters advocating co-operation with Sweden's third-biggest party has gone down – as has the number of people who want to see the party completely isolated, which is 41 percent of voters in total, according to the Ipsos poll. The number of undecideds, however, has grown.

“We don't see a huge change since September, but it's still a kind of continuation of a trend over the past few years that indicates that more and more are starting to look at the Sweden Democrats as a party among other parties,” Ahlin told DN.