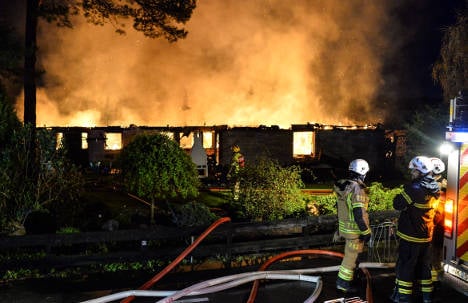 A home in southern Sweden burned down after lightning struck. Photo: Johan Nilsson/TT

In Höllviken, near the south-west tip of Sweden, a house burned to the ground after lightning struck.

“The whole sky was lit up and the floor was shaking inside. When I got out the house was well alight,” witness Henrik Westberg, who lives a couple of hundred metres from the burned-out property, told Swedish news wire TT.

A number of people were inside the house when lightning struck, but all escaped without injuries, according to fire officer Paul Bjurehag of the Fire and Rescue Service in southern Sweden.

“This happened very fast, the lightning must have ignited the attic immediately. We had to focus on helping the family get their valuables out of the house and protect neighbouring buildings from sparks,” he told TT.

But Sweden escaped the great devastation found in other parts of Europe on Tuesday evening.

In Hamburg, one person was fatally wounded after his car was hit by a falling roof.

“It's like no other storm I've ever seen, trees were pulled up by their roots, it's completely insane,” one resident in the German village Bützow told Swedish broadcaster SVT. An upside-down car in Bützow, Germany. Photo: NonstopNews/dpa via AP

According to the website LightningMaps.org, lightning struck 230,000 times on Tuesday, mostly in Germany and Denmark.

In Sweden, the risk of more thunder storms was believed to be over by Wednesday morning, according to Swedish weather institute SMHI. But a rain storm from the south was set to head north over the course of the day.

“There could be quite a lot of rain during Wednesday in northern parts of the country,” said meteorologist Stina Kihlgren.

However, southern and central parts of Sweden can expect temperatures of around 15C, and perhaps even some sun on Wednesday – with more of the nice weather promised this weekend.