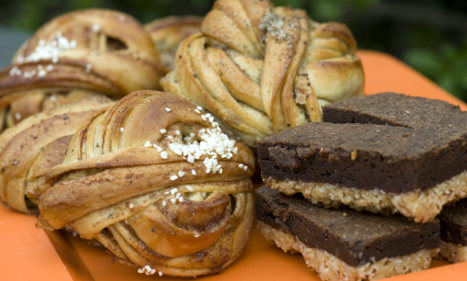 Should Swedes cut down on sweet snacks? Photo: TT
Sweden is one of Europe's least obese countries but new research suggests its residents are catching up with other EU citizens struggling to keep their weights down.
More than 25 percent of Swedish men will be obese by 2030 along with 22 percent of women, according to a World Health Organization (WHO) study set to be presented at a European Congress on Obesity in Prague this week.
Despite Sweden's global reputation for promoting a healthy lifestyle, researchers fear that the Nordic nation is fast catching up with other parts of the continent where growing numbers of overweight and obese people are struggling with sickness and disability.
"Even in countries with a traditionally lower prevalence of obesity such as Sweden, obesity rates are predicted to rise sharply," the congress report said.
A previous report by the WHO in 2013 suggested that 19.9 percent of men were obese and 17.3 percent of women.
"First of all people's lifestyles are changing – they are becoming sedentary and their eating habits are also changing," Peter Bergsten, a professor of medicine and cellular biology at Uppsala University told The Local.
He is leading research on some of the other possible factors behind growing obesity in Sweden and around Europe including genetic predisposition to weight gain and hormonal imbalances.
"Migration to the EU and between different countries is also an issue because it is making regional patterns less clear," he added.
"Europe is becoming more homogeneous, with different ethniticies appearing in all countries, and so there are more varied diets appearing in different nations…fewer differences between individual nations." An overweight Swede in 2011. Photo: TT
The professor said that while researchers in his field were keen to avoid fuelling prejudices against different ethnicities, "it has been reported that hispanics for example have a genetic predisposition to becoming more obese than caucasians."
"These kind of concepts are a little bit tricky to work with nowadays, but we want to do more genetic research to work against prejudices and help people to be alleviated of certain problems and generally to be more healthy," he added.
"The conference in Prague this week is evidence that obesity is really a serious problem."
People with a BMI (body weight index, a ratio of weight to height) of 25 and higher are officially classified as overweight by the WHO and those with 30 and over are obese.
Ireland is currently the fattest nation in the EU.
Some 89 percent of Irish men will be overweight by 2030, and nearly half obese, the latest WHO study predicts.
Meanwhile it suggested that 64 percent of UK women and 74 percent of men would be overweight in 15 years' time.
The Dutch are the thinnest people in Europe according to the study.
About 49 percent of men will be overweight and eight percent obese by 2030, compared to 54 percent and 10 percent in 2010. For women, overweight rates will remain stable at around 43 to 44 percent, while obesity is likely to drop from 13 percent to nine percent.
A study last November by the McKinsey Global Institute said more than 2.1 billion people globally – nearly 30 percent of the world population – are now overweight or obese, with obesity causing about five percent of all deaths worldwide.