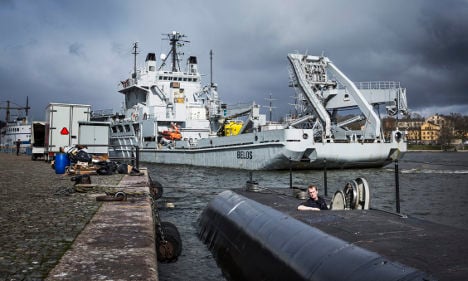 Swedish military in Stockholm in April 2015. Photo: TT
Sweden's ability to defend itself should Russia increase military activity in the Baltic remains a hot topic in the Swedish media, a fortnight after the country's centre-left government announced a new 10.2 billion kronor ($111.9 million) defence deal designed to increase the country's capabilities.
Swedish critics of the plan have argued that the proposed spending will not be enough to protect the country. Last week, Sweden's Supreme Commander Sverker Göransson even spoke at a public hearing of Sweden's Parliamentary Defence Committee and questioned why Sweden's defence budget was lower than that of other Nordic countries.
Sweden's army has been reduced by 90 percent over the past few decades, from around half a million to some 50,000 troops today.
Keir Giles, who is a leading British expert on security issues affecting Russia, has joined the debate and questioned Sweden's current resources.
"If you compare the state of the Swedish military now to how it was 20 years ago or even 10 years ago, it is alarming," Giles told The Local on Wednesday.
His comments followed a separate interview with Swedish newspaper Dagens Nyheter (DN) in April, in which he said that Russia had a clear goal to "cut off the Baltic states from the outside world".
He also fuelled concerns about an attack by arguing that the island of Gotland off Sweden's east coast remains vulnerable without a permanent military presence. DN's article triggered a strong debate on social media and in other newspapers about the issue.
"I was surprised by their [the Swedish media] response to what I said, because there has been a specific discussion about Gotland for some time," he told The Local.
When asked directly about his concerns for Gotland, he said: "There is talk about putting a defence company on the island, but even then you're talking about a tiny number of troops in a large area."
Various defence think tanks and political analysts had already released "detailed scenarios" outlining what might happen if Sweden is attacked and suggested that Sweden's army could only defend itself for a matter of days or weeks.
Giles said that most European leaders were "well aware" that Russia was "deliberately planning a war on two fronts" where it would fight both in Ukraine and elsewhere in Europe.
According to the expert, future violence would most likely "but not necessarily" happen in the Baltic region.
"There is no inevitability about this, but it is definitely something that defence planners should be preparing for," he concluded.
In March, Sweden's Security Service Säpo said that the biggest intelligence threat against Sweden came from Russia in 2014.
Its annual report described Russian espionage against Sweden as "extensive", noting that it had increased in connection with the Ukraine crisis.
In September 2014 two SU-24 fighter-bombers allegedly entered Swedish airspace in what the former Foreign Minister Carl Bildt called "the most serious aerial incursion by the Russians" in almost a decade.
The following month a foreign submarine was spotted in Swedish waters, although the Swedish military was unable to determine where it came from, with details of a second October submarine search made public a few months later.