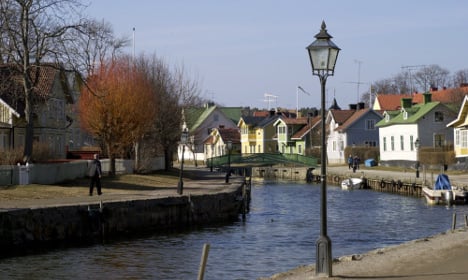 We may have exaggerated the headline. If you're a fan of Nordic Noir, you have definitely heard of Ystad. This is the home of famous Swedish television detective Kurt Wallander and both the Swedish original and Kenneth Branagh's BBC version were shot on location. Tourists can go on conceptual guided tours that follow in the rugged policeman's footsteps along the town's cobble stone streets. If you would rather investigate ancient history than fictional crimes, the 11th-century town, located at the southernmost tip of Sweden, also has a fascinating history and is home to one of Sweden's best-preserved medieval Fransiscan monasteries, the Greyfriars' Abbey.

Travel here: By train from Copenhagen Airport or ferry from Poland.

Founded by a Swedish Viking King Erik Segersäll (Erik the Victorious) in 980, Sigtuna lays claim to the title of Sweden's oldest existing town. The medieval town centre consists of narrow, winding streets lined by small wooden houses and handicraft shops. Many of its residents work in Stockholm and commute to and from their workplaces every day via the nearby train station at Märsta, so it is easily accessible even for just a day trip from the capital. Places to visit include Sigtuna Museum and the ruins of the remaining three of its old stone churches, erected by the towns wealthy merchants in the Middle Ages.

Travel here: The bus from Stockholm's Arlanda Airport takes just under half an hour or you can go by train from the city centre. Located just west of Luleå in the far north of Sweden, getting here is a bit of a trek, but it is well worth it. The oldest part of the town, Gammelstad Church Town ('Gammelstads kyrkstad'), is similar to Scotland's old kirk towns and consists of a collection of some 400 cottages where visitors from further afield used to spend the night when they visited the 15th-century church. It is a Unesco World Heritage Site and the best preserved example of a type of hamlet that was once very common in northern Sweden where distances between towns were great. Famous Swedish botanist Carl Linneaus visited in 1732 and wrote that “although the summer here is shorter than all other places in the world, I would also claim that it is sweeter”.

Trosa is a small town with only about 5,000 residents, but its beautiful location by the sea on the east coast of Sweden and its town centre with plenty of trendy as well as traditional shops makes it a popular destination for savvy tourists. Conveniently located about an hour south of the capital, it is a great place to spot some Swedish celebrities, with former Abba member Benny Andersson, actor Mikael Persbrandt ('Beorn' in The Hobbit to international readers) and even the Swedish Royal Family owning summer houses here. Fun fact: Trosa means 'women's underpants' in Swedish. Don't make any jokes about this – the locals have heard them all.

Travel here: By bus from Skavsta Airport in Nyköping or by a train/bus combo from Stockholm. From a small but wealthy fishing village in the 16th century to a vibrant sea resort for the rich some hundreds of years later, Marstrand on Sweden's west coast has seen many a visitor come and go. Even today, Swedish tourists pour into the town in summer to admire its beautiful houses, sip a coffee at its many cool cafes and take part in the annual regatta. The impressive Carlsten stone fortress at the top of the hill in the town dominates the Marstrand skyline. Oh, and if you failed to spot any celebrities when you visited Trosa, keep an eye out for members of the Swedish Royal Family in the crowds outside the posher beach cafes.

Travel here: By boat cruise or bus from Gothenburg Airport. Marstrand with the Carlsten fortress on the right. Photo: Per Pixel Petersson/imagebank.sweden.se

Mölle on the south-west coast of Sweden has given rise to the famous (some would say infamous) phenomenon of 'the Swedish sin' which has influenced many a foreigner's stereotypical view of the liberated Swede. Innocent though it may seem today, the reason was its then-shocking-but-oh-so-widely-popular mixed sex bathing area, which attracted visitors from all over Europe (up until the First World War there were regular trains running from Berlin to Mölle). Those of you hoping that its scandalous reputation has kept up with the times will be disappointed, but the scenic harbour with plenty of cute cafes (The Local can highly recommend the waffles) and fascinating architecture will keep most visitors happy. The dramatic scenery and craggy hills around the town are great for hiking, too. Travel here: If you're travelling from abroad, rent a car at the airport in either Gothenburg or Copenhagen and drive here. If you're based in Sweden, a train/bus combo via Helsingborg is your best option. Those were the days. Mölle at the start of the 20th century. Photo: SCANPIX