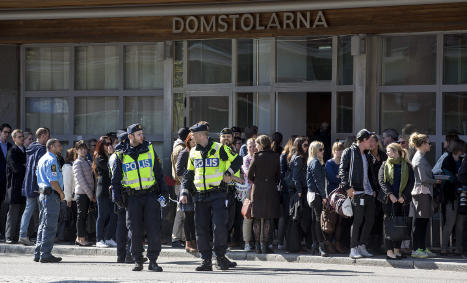 The court in Uppsala after the threat. Photo: TT

Police cordoned off the area around the court at around 9am and called in a bomb squad from Stockholm to check the property.

By midday the building had been searched and reopened, with no suspicious package recovered.

“The promises have been vacated and there is an ongoing thorough search,” police spokesperson Christer Nordström told the TT news agency at around 11am.

“It is clear it is serious,” he added.

The threat was reported to have been linked to the trial of three members of the Swedish Nazi Resistance Movement who are facing charges following violence in 2013.

“Flyers were handed out by the far right and the mood was heated…a man was beaten up," said Christer Nordström of the event two years ago.

Nordström added that there was already a high police presence at the court in anticipation of any potential violence, with seven police cars in the area.

But police later told Swedish broadcaster SVT that they had not yet confirmed a connection between the bomb threat and the earlier violence.

The trial was set to resume on Thursday afternoon.

The Swedish Nazi Resistance Movement (SMR) was formed in the mid-1990s, attracting the support of defectors from other extreme right groups in Scandinavia. Much of its propaganda claims that Jewish people are harmful to society and promotes the idea that ‘Aryan’ Swedes are a superior race.