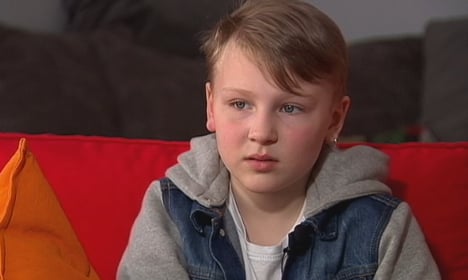 "I've always thought that I am more of a boy because when I was little I used to wear boys' clothes. I have always felt more like a boy and then I started to think that what if I actually am a boy. It felt good to understand that, but it was hard that nobody knew," Sam tells the interviewer in the video, which originally aired as part of public broadcaster SVT's children's news show 'Lilla Aktuellt' on Wednesday evening.

The reactions have been plentiful – and overwhelmingly positive, with Swedes flocking to social media to voice their admiration of Sam.

One Swedish journalist wrote on Twitter: "To live in a country where this kind of thing is talked about on 'Lilla Aktuellt'. What a thing."

Another wrote: "10-year-old Sam is smarter than so many adults. (Yes, this story made me weep.)"

Sam, which is always used as a boy's name in Sweden, told his parents of his decision to live as a boy around Christmas. And after support for the family has been pouring in from all directions, his mum Victoria said she could not be more proud of her son.

"We are touched, happy and insanely proud of our cool Sam who dared to do this. Thank you everyone for your positive shout-outs and love!" she wrote on Facebook.

Sweden is known for being an open and tolerant country, with the dictionary now including the new gender neutral pronoun 'hen' and many public places starting to introduce unisex toilets for people who do not identify with either gender.

But the debate is not completely uncontroversial, even in Sweden, and Victoria told SVT she was rather nervous ahead of the broadcast.

"I was terrified. We'll have a lynching mob, I thought. But now everything's great, the reactions have almost exclusively been positive," she said.

Sam's friends and teachers at school have also supported his decision. And Sam himself thinks it should be up to everyone to make up their own minds as to who they want to be and what they want to do.