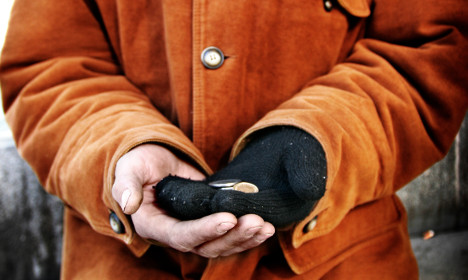 A Swede raised tens of thousands for beggars on Twitter. Photo: Oskar Kullander/SvD/SCANPIX

Residents in the Swedish town of Mönsterås in south-eastern parts of the country told public broadcaster SVT earlier in the week that they had started their own street collection – in an attempt to specifically outcompete a group of EU migrant beggars camped up in their area.

They said they wanted to use the 1,700 kronor ($207) raised to buy 'fika' (a word for 'having coffee and cake' and a popular Swedish tradition) for elderly people.

"The beggars often target the elderly, so we wanted to buy them at least a free 'fika'," said one of the residents behind the initiative.

When lawyer Viktor Banke, who lives in Stockholm, heard this he was shocked. He started a campaign on Twitter to raise money for the beggars in Mönsterås and after just three hours he had collected more than 19,000 kronor.

"[It's a] pleasant surprise," he told The Local on Thursday about the social media sensation.

"I think that many people feel a desire to hit back against the general tendency of a harsher attitude towards society's vulnerable groups in general and migrants in particular," he said.

Banke told The Local he had been in touch with connections in Mönsterås to ensure the migrants received the money.

"I don't see those who are trying to get rid of the beggars as any monsters, but it's sad that they think that you have to choose between Swedish pensioners and migrants. It's a fabricated contradiction that only racism benefits from," he said.

"I felt a need to show these vulnerable people that not all Swedes want to get rid of them, as well as showing those who are trying to get them to leave that their views are not representative of the majority," he added.

The number of EU migrants in Sweden is thought to have doubled since last year, with around 4,000 believed to be begging on the country's streets.

A survey by Expressen/Demoskop last week suggested that a majority of Swedes, some 71 percent, would support banning organized begging. But a parliamentary justice committee rejected a proposed ban this month.

The idea remains controversial with some of its critics arguing that careless use of it simply stigmatizes all EU migrants.

And Banke told The Local he has faced many reactions – both positive and negative – since he started his Twitter fundraising campaign.

"An overwhelming majority of positive shout-outs, as well as anonymous hatred. As usual, in other words," he said.