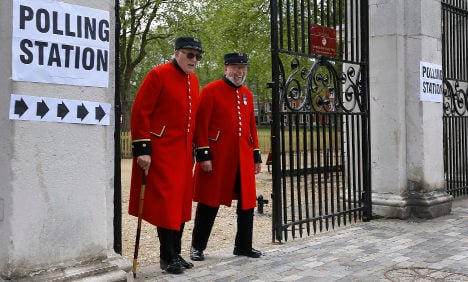 ‘Storbritannien’ (UK) 'I voted' and ‘polling station’ were among the top trending topics on social media in Sweden on Thursday as Swedes caught on to a British debate about whether people should be allowed to take selfies at voting venues.

Meanwhile the Swedish newspapers were hyped about the potential result of one of the most closely fought general elections in the UK decades.

“Will it be Cameron? Or Miliband? Or a new election?” wrote Helsingborgs Dagblad.

Svenska Dagbladet headlined its article: “Uncertain outcome of the Battle of Britain”.

Dagens Nyheter tapped into UK election fever with a “How British are you?” multiple choice quiz, including questions such as “What is the name of the Queen’s son who is next in line for the throne?”, “Where in the UK do you live if you are a Geordie?” and “In which European city did Princess Diana die?”.

According to Sweden-based British political scientist Nicholas Aylott, who works at Södertörn University, Swedes are likely to be interested in UK politics because of “a combination of cultural similarities”.

He told The Local that these include “the English language, which pretty much all Swedes can use; and the attraction of London, northern Europe’s mega-city, where many Swedes have spent time.”

He added: “All that serves to make British politics relatively interesting and accessible.”

But Scandinavia commentator and Scotland-born journalist David MacDougall posted on Twitter that he believed few Swedes would be losing sleep and watching the results come in.

“Does anyone REALLY care to stay up all night watching UK elections in Sweden? Hmmm…doubtful!” he wrote.

For those who do want to tap into the buzz, Swedish broadcaster SVT is hosting an hour-long UK election special live from London, which will be in a mixture of English and Swedish. It gets underway at 10.45pm on SVT1.

Those with satellite and cable television in Sweden can also watch coverage on BBC World and Sky News, some of which is also available to view online.

Several British pubs around Sweden are planning to show election night coverage on big-screen televisions, including some branches of the nationwide Bishops Arms chain and the Tudor Arms, an independent pub in Stockholm.