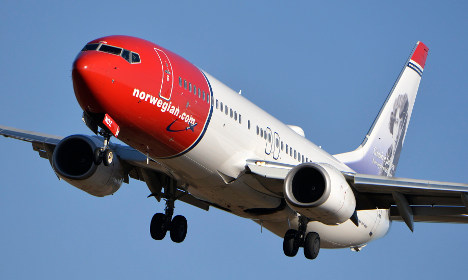 A Norwegian plane had to turn back to the airport. Photo: Johan Nilsson/TT

The plane had just taken off from Copenhagen Airport in Denmark, which is the main hub for southern Swedish travellers, and was en route to Barcelona in Spain when it was struck by lightning.

It was then forced to circle the airport until it was able to land at around 9.50pm on Wednesday.

“We saw the flash of light and shortly thereafter the plane turned around. We got that something was wrong. I can only say that it seems crazy to go up in the air in that weather; I saw how we flew into a cloud as dark as coal. There was turbulence and then the flash of lightning,” passenger Ola Nigård told newspaper Aftonbladet.

“I'm calm now, but perhaps the shock will come when you get time to think about it,” the Swede added and said that several of the passengers had been frightened by the incident.

According to Danish newspaper BT, 143 passengers were on board.

A spokesperson for budget airline Norwegian's Danish subsidiary said that all were offered seats on a replacement plane, which took off safely around an hour later, but he could not confirm how many took up the offer.

“Immediately after start the plane was struck by lightning and because safety is top priority to us at Norwegian the captain turned around and landed the plane,” Daniel Kirchhoff told regional Swedish newspaper Sydsvenskan of the incident.

“The plane will be looked at by our technicians,” he added and said he did not know whether or not there had been any material damages to the aircraft.

Norwegian is Europe's third-largest budget airline. A recent 11-day long strike is estimated to have cost the company 375 million kronor ($43 million) after pilots walked out in a row over contracts, leaving 150,000 passengers stranded in March.

Meanwhile, the thunderstorm which hit southern regions of Sweden on Tuesday continued on Wednesday night, with another property catching fire after lightning stuck. The family in Örkelljunga escaped unharmed, according to regional newspaper Helsingborgs Dagblad.

It is the second incident in just two days; on Tuesday a house was gutted by a blaze in Höllviken on the southernmost tip of Sweden after it was struck by lightning.