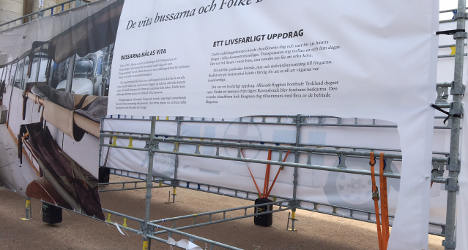 The vandals zoomed in on the part of the exhibition that focused on Jews. Photo: Mikael Ringlander/ Handout picture/TT

“They have consciously cut out the part that concerns the Jews, nothing else was touched,” Reverend Mikael Ringlander, one of the organisers, said of the attack that occurred overnight to Saturday.

“We held a ceremony in the synagogue yesterday. It must have angered someone,” he said, adding the incident has been reported to police

The weekend exhibition in Gothenburg had been staged to mark 70 years since Sweden’s Red Cross together with the Danish government in the spring of 1945 sent hundreds of buses to German-occupied territories to rescue people imprisoned in Nazi concentration camps.

The buses were painted in white with red crosses on them to distinguish them from military vehicles, thereof the name of the “White Bus” mission.

The operation, which was led by Count Folke Bernadotte – who was deputy chairman of the Swedish Red Cross at the time – is credited with rescuing some 30,000 people of which at least 10,000 were Jews.