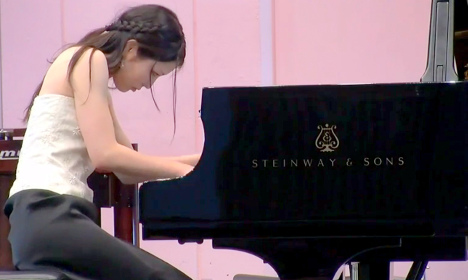 Hayashi, 27, grew up in Fukui in Japan. Influenced by her mother, a piano teacher, she found her path in music at an early age.

“I started playing classical music when I was three years old. At university I got interested in Nordic music education and I moved to Helsingborg in southern Sweden to do a course there,” she says.

When her course finished, she returned Japan. But there was one thing she had left behind in the Scandinavian country which kept pulling her back: a tall, blond Swede by the name of Hannes Egnell.

“I had met my boyfriend, who played the jazz drum, in Helsingborg and long distance is difficult, so I moved back to Sweden pretty quickly,” says Hayashi.

Almost two years later, she now lives with the same boyfriend and teaches music at the international school in Stockholm. Together, they compose an array of sound art – which sounds almost like small, musical poems, and is a fusion of electronic and more naturally produced musical notes.

“I was born in Japan and I grew up around beautiful nature and close to the sea, so I like to use nature sounds in my music,” says Hayashi.

“I think my kind of improvisational music works better here in Sweden than in Japan. Sweden is very open to accepting new kinds of music.” From December to March this year one of the pair's pieces was played at an installation at Sweden's Nobel Museum. The museum is one of Stockholm's most popular tourist attractions and runs exhibitions about the Nobel Prize, which is handed out in Sweden and Norway.

“One of mine and Hannes' friends, Alf Carlsson, had been asked by the museum to compose something for the exhibit and he in turn asked us to help. We were told to interpret the Nobel Peace Prize freely,” Hayashi explains.

It is not the only accolade the creative couple, who call themselves 'krimskrams' (a Swedish words meaning 'knick knacks') have racked up. Director Takashi Yamamoto's short movie 'An Empty Seat', for which they composed the score, has been shown at movie festivals worldwide, including Boston and Osaka.

And closer to home in Stockholm, her music is being used in an upcoming summer dance production, which she is co-directing with yoga and dance instructor Ai Hiroshima Hjelm.

Hayashi says that while she finds inspiration in nature in particular, she also sources it from other art, dreams and food.

“Everything, really. And Sweden has so many different cultures and a lot of immigrants, so it's a good place to get inspired and get influenced by other kinds of music as well. This is not always the case in Japan, which is a shame,” she says.

“I love how close I am to the Swedish nature here in Stockholm. People always mention the weather as something they dislike, but I don't. I like the winter here and I don't think it's that cold.”

Looking for work in Sweden? Check out The Local's job site for thousands of opportunities for English speakers