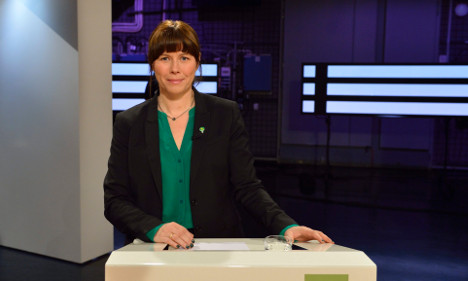 Åsa Romson ahead of the debate on Sunday. Photo: TT

Åsa Romson used the term “zigenare” following a debate between the leaders of Sweden’s major political parties, broadcast on SVT.

The word, which means “gypsy” in English is deeply offensive. In April it became one of a selection of words followed by the phrase "använd istället" (use instead) in the latest edition of Sweden's official dictionary produced by Svenska Akademien (The Swedish Academy). The book advises all Swedes to use “Roma” instead.

But Romson used word term “zigenare” instead of “Roma” as she defended describing the migrant crisis in Europe as “the new Auschwitz” in the broadcast on Sunday night.

After her comparisons with the mass killings proved controversial, she told SVT she wanted to apologize to “any of the groups” affected by Adolf Hitler’s crimes during the second word war including “zigenare” (gypsies), Jews and gay people.

She also said the word “zigenare” during an interview with Sweden’s Expressen newspaper on Sunday.

The leader later told SVT that she was sorry, adding that she had used an expression that “did not fit”, while trying to make a strong argument about the migrant crisis in the EU.

Her press spokesperson Hellström Gefvert later told the broadcaster that Romson had been “tired” after the debate and knew that her choice of words was “indefensible”.

On Monday, Romson issued another apology on Twitter, posting: "Again: It was wrong to make an Auschwitz analogy. I sincerely apologize".

Sweden's Social Democrat-Green government announced last month that it was going to allocate 13 million kronor a year from 2016-19 to help tackle racism towards Roma people, including increasing understanding of Roma culture and language in Sweden's education and social care sectors.

Romson is not the first Swedish politician to compare Europe's refugee crisis to the Holocaust.

Last month, Liberal Party MEP Cecilia Wikström told The Local that EU member states were currently doing so little to help guarantee safe passage for migrants that future generations would compare their actions to Sweden "turning a blind eye" to the Holocaust.

"I think that my children and grandchildren are going to ask why more wasn't done to help people running away from Isis, or violence in Eritrea or wherever, when we knew that people were dying in their thousands. People will ask the same question they did after the war, 'if you were aware, why didn't you do something?'", she said.