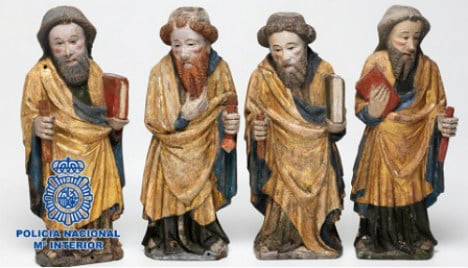 A 63-year-old Spanish man in Tenerife, one of the Canary Islands, was arrested and charged for a “crime against historic heritage” after police found 43 religious objects from Swedish churches in his home.

The man had previously served five years in Swedish prison for similar crimes and was known by the nickname el expoliador de iglesias suecas, or “the plunderer of Swedish churches”.

Swedish investigators contacted the Spanish police about the missing artworks because the Tenerife man was their prime suspect.

After investigating the man together, officers searched his house and found 43 items ranging from an 18th century Bible, to 15th century wood carvings of “great historical value”. Investigators were able to locate four more items in Madrid, which had been sold through an auction house.

Authorities also determined that the man must have had warehouses in Denmark and with the help of police there were able to track down two storage spaces.

There officers found even more religious items. Based on material they found in Denmark, police then returned to the man's Tenerife home to find three more items that had been stolen including part of a 15th century altarpiece.

German authorities also helped in conducting research for the investigation.