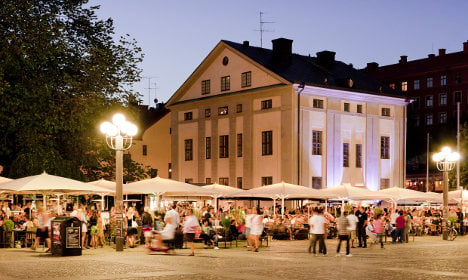 Outdoor drinking in Stockholm's Medborgarplatsen. Photo: Connie Fridh/Image Bank Sweden
Swedes are putting away more wine, drinking spirits less often and adopting a more 'continental' approach to alcohol, with drinking no longer confined to the weekends.
While Swedes still drink much less than southern Europeans, the OECD's research showed that alcohol consumption had increased by 16 percent between 1992 and 2012.
It found that the average Swede now drinks the equivalent of 7.3 litres of pure alcohol a year.
Estonia, Austria and France had the highest consumption, with 12 litres or more per person per year.
OECD members Norway, Iceland, Poland, Finland, Britain and Ireland, also notched up large increases in alcohol consumption during the study period.
But consumption across the 34 rich economies studied by the OECD declined by 2.5 percent on average over the same period.
Those countries below the OECD average included South Korea, the United States and Canada, while the lowest on the list were Israel and Turkey.
Within the broad overall decline, “many countries have experienced a significant increase in some risky drinking behaviours,” the report said.
READ ALSO: Alcohol becoming more accepted in Sweden
The biggest surge in youth drinking was seen in Russia, followed by Estonia, and then India and China, which like Russia have partnership status with the OECD and were included in part of the analysis.
But there were declines in youth drinking in Italy, France and Slovenia.
The binge-drinking phenomenon appears to have several causes, the OECD said.
They include access to relatively cheap drink, but also the pitching of alcoholic beverages to a youth market, promoted with music and a partying message.
The report said that worldwide harmful consumption of alcohol rose from eighth to the fifth leading cause of death and disability from 1990 to 2010.
Curbing dangerous drinking requires a basket of strategies, focused especially on the “social norms” that drive boozing, it concluded.
“A tax hike leading to an average increase of 10 percent in alcohol prices, as well as a range of regulatory approaches, would also generate large impacts,” it said.
Swedish attitudes towards alcohol have become increasingly permissive over the past five years, according to an alcohol survey by the organization IQ released in March.

While grabbing a casual beer or two after work with friends is a behaviour more typically associated with British or Italian culture, the research backs up the OECD's latest findings in suggesting that meeting up for an 'afterwork' is gaining acceptance in Sweden, with less than one in five people quizzed saying they thought it was wrong.

“We drink more often and in different contexts today than we did ten or twenty years ago. Alcohol is more present in our everyday lives, which also affects our attitude towards alcohol,” Magnus Jägerskog, CEO of IQ said at the time.