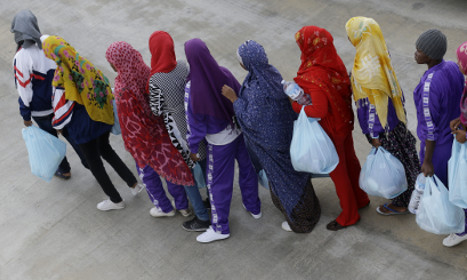 Proposals to ensure a more balanced spread of refugees across the EU are expected to be put forward by the European Commission in Brussels on Wednesday, alongside plans to increase legal means for migrants to travel to Europe.

The move, first reported in Britain’s The Times newspaper on Monday, aims to create legislation that would force all 28 member states to share responsibility for “mass influxes” of non-EU migrants during times of emergency.

Sweden’s Justice and Migration Minister Morgan Johansson has told The Local that he is “looking forward” to seeing the full Commission Agenda on the issue, and said media reports already suggest the EU’s policy-making body is “on the right track” at a time when “it is clear we have to improve the responsibility sharing within the Union”.

“Our Common European Asylum System is not very common in a situation where a handful of Member States are taking the responsibility for over 90 percent of the asylum seekers,” he said late on Monday.

Italy and Austria are among the other member states backing the proposals, while a spokesperson for the UK Home Office told The Times that Prime Minister David Cameron’s new Conservative government “will oppose any EU proposals to introduce a non-voluntary quota”.

“Mad and unfair” was the description Hungary’s Prime Minister Viktor Orban gave to the plan.

Germany is strongly in favour of the idea, having long pushed for quotas, while France’s Interior Minister Bernard Cazeneuve also came out in support of the proposals on Monday.

“I think it is normal to share out the asylum claimants,” he said.

Under the reported proposals, the number of refugees sent to each EU country would in future be determined according to a formula which considers factors such as unemployment, economic performance, population size and the number of previous arrivals.

It is estimated that more than 5000 migrants have died over the past year while making their way to Europe from war-torn nations such as Syria, Iraq and Libya, in packed boats travelling in dangerous conditions.

Sweden’s Justice and Migration Minister Morgan Johansson told The Local that he also backed the Commission’s proposals to secure a safer passage to Europe for refugees.

“The lack of regular channels to seek protection fuels smuggling,” he said.

“Therefore we need to see a substantial increase in the use of resettlement on an EU-level. Sweden also wants the EU Commission to investigate other realistic possibilities for people to seek protection in the EU.”

In the meantime, Sweden is continuing to prepare itself for new arrivals.

Fifteen thousand more asylum places are expected to be needed in the Nordic country this year. To cope with an increasing flow of refugees, the Swedish Migration Board announced in March that it has more than tripled the maximum number of residents allowed at each asylum centre in the nation from 200 to 650.

EU leaders are set to discuss the quota proposals in Brussels when they meet on June 25th.