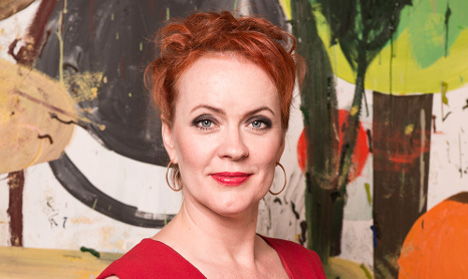 After receiving tips that fake artwork was on the site, a reporting team from Swedish broadcaster SVT logged on Lauritz.com, which has 24 branches in Sweden, Denmark, Germany and Belgium.

It bid on and bought two Andy Warhol ‘original prints’, one a portrait of fellow artist David Hockney, the other of Mick Jagger.

But a leading expert in printing techniques, Roger Johansson, told the show’s reporter that the artwork was fake.

Works for sale that are classified as ‘original prints’ are supposed to have been printed by hand, either by the artist or a professional assistant, for example using a plate or stencil.

According to a stamp on the Hockney picture, it was produced by the prestigious Carnegie Museum of Art in Pittsburgh, CMOA.  But the museum denied ever owning the print. Johansson said he believed it had instead been produced on an inkjet computer printer.

The Mick Jagger portrait is labelled as having been printed in 1975, but Johansson told SVT that it was probably made using a screen printing method that wasn’t available until the 1980s.

A tweet by the SVT programme showing experts analysing the art

Lauritz.com has now contacted police about a seller which it believes was behind the sake of the fake art, and has withdrawn 36 items from the site.

CEO Mette Rode Sundstrøm told SVT that it was likely that more than 40  fake copies of the Hockney portrait had been sold in the past year.

“It’s a fake stamp. We were actually aware of the stamp and our experts have been looking out for it over the past year. Therefore it is quite sad and also embarrassing that we have sold these counterfeits,” she said.

She said that the Jagger portraits were not fake, but had been “mislabelled”.