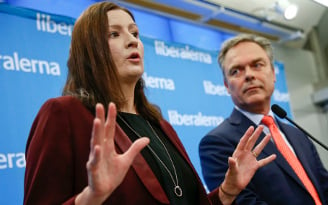 Birgitta Ohlsson disagrees with Jan Björklund's new policy on immigration. Fredrik Persson / TT
The Liberal Party's foreign policy spokeswoman, Birgitta Ohlsson, has signalled her intention to oppose party leader Jan Björklund's new policy on immigration.
He has recently suggested that Sweden abandon the principle that those who are granted asylum in Sweden gain permanent residency.
Ohlsson, who was a government minister when the Liberals were part of the previous centre-right Alliance government, will demand at the party's annual congress in the autumn that Björklund ditch his push for restrictive immigration policies, according to Swedish public radio.
Björklund's proposal – which was first put forward by the party's integration policy working group – is that permanent residence permits should only be granted after three years, or when the person can support himself.
There is also another rival faction within the party which wants to pursue an even more restrictive immigration policy than that proposed by Björklund in January.
Ohlsson's press secretary, Jonatan Olin, declined to comment on the story on Thursday.
The party split highlights an increasingly tense political debate over immigration in Sweden.
Prior to the last general election in September 2014, all the mainstream parties were united in promising permanent residency for those granted asylum, with the former Prime Minister Fredrik Reindfelt calling on Swedes to “open your hearts” to immigration.
But following the rise of the nationalist Sweden Democrats, who scored 13 percent in the vote, Sweden's centre-right political groups — which are now in opposition — are developing a tougher stance.
Anna Kinberg Batra, who recently took over from Reinfeldt at the helm of the Moderates has also mooted temporary benefits in recent weeks and the idea is backed by the Christian Democrats.
The Social Democrat-led government remains in favour of permanent residency for refugees, although it has backed recent proposals from the European Commission that would see asylum seekers shared out more evenly across Europe.
Sweden currently takes in more asylum seekers per capita than any other EU nation.
Url copied to clipboard!