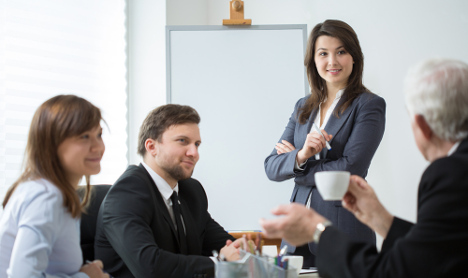 The warning comes off the back of a government plan to introduce a quota law to ensure companies have a greater representation of women on their boards.

Gender Equality Minister, Asa Regnér, told Swedish newspaper Svenska Dagbladet earlier this year that she believed a gender balance bill could be introduced by 2017. But she did not mention what the sanctions would be for failing to comply with any new quota.

On Friday, Justice and Migration Minister Morgan Johansson told Swedish Radio that there could be a number of punitive measures to ensure companies take the legislation seriously.

“The company could be dissolved or fined heavily,” Johansson said. He suggested that any penalty payment could be related to the company’s size.

Johansson went on to say: “I think that every party that wants to call itself feminist must also be involved to tear away this glass ceiling [on female advancement in the workplace] – otherwise it will be just empty words.”

But he later retracted his comments that companies might be wound up.

“Hold your horses,” he wrote in English on Twitter.

“Before you run the campaign too far I want to clarify that I am not currently proposing the dissolution of companies,” he said.

However he wrote that a “substantial penalty” could be imposed on firms that failed to demonstrate greater gender balance.

Johansson’s comments come at a time when there has been a strong spotlight on gender equality in Sweden as recent data has shown the country is now stalling despite previous rapid advances made on the issue.

Even taking various parameters such as age, education, work hours and that women and men are found in different sectors and work groups, women's salaries have stayed at 93 percent of men's salaries. This figure has remained much the same since the middle of the 1990s.

Amanda Lundeteg, CEO of Allbright, a Swedish foundation that works for more women in leadership positions told The Local earlier this year: “The problem in Sweden is we tend to have small powerful networks of people in business in Sweden and they recruit people who are also part of those networks and they are mostly men.”