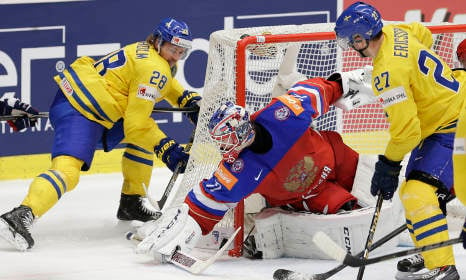 Russia raced into a 3-0 lead early in the second quarter, leaving Sweden looking down-and-out. But a ferocious and spirited comeback saw Sweden haul themselves back into contention for a semi-final match against the USA, with two goals from Anton Lander and an equaliser from Loui Eriksson with just over five minutes left.

Unfortunately, 26 seconds after Eriksson tied the scores, Russia scored a very lucky winner when Yevgeny Malkin's weak shot took a deflection off Oliver Ekman Larsson's skate and squirted in behind goaltender Anders Nilsson. In the last seconds, with Sweden pouring forward, Russia confirmed the victory with an empty net goal.

After the match, Anton Lander lamented: “We had the game, that is what frustrates us so much.”

The defeat was a blow to Swedish pride because the national side tops the ice hockey world rankings, just ahead of Russia.

Ice hockey is the second best-supported sport in Sweden after football.

The national side has enjoyed huge success over the years, winning eight Olympic medals, including gold medals in 1994 and 2006.

The team has also won the world championships nine times, most recently on home ice in Stockholm in 2013.