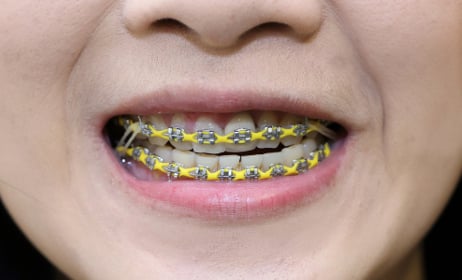 Braces are becoming more common for adults. Photo: Shutterstock
According to Britt Hedenberg-Magnusson, head of the Swedish Public Dental Service (Folktandvården) in Stockholm County, the number of Swedish adults having braces fitted has increased by 500 percent over the last five years.
“The number calling us is increasing rapidly,” Hedenburg-Magnusson says. “People definitely seem to have an increased interest in aesthetics.”
Another reason is that several new methods can make braces practically invisible.
“They need not look like barbed wire as they did before”, says Eva Ljungberg, who runs a Stockholm orthodontal clinic.
The SACD, an organization formed in response to what it calls the “low standard in aesthetic-cosmetic dentistry” in Sweden has also noticed a “substantial increase” in the last three years. “Customers want straighter, finer teeth,” says chairman Ann-Andre Bergmann.
The state's costs for adults who need braces increased by 20 percent between 2011 and 2014, according to Försäkringskassan, the Swedish social insurance agency. But Swedes have to fund any purely cosmetic changes themselves.
One Swedish woman who paid for her own braces is Lydiah Wålsten, who opted to get hers fitted in the US. She remembers when as a teenager she was told that her malocclusion was considered too minor for the Swedish state to bear the cost. “I could not afford to do it myself. I remember I rode through Uppsala and cried,” she says. She says she did not like herself when she smiled.
“Five years ago, I decided to get my teeth straightened.” Wålsten found a dentist in New York and underwent treatment there. The cost was about 25,000SEK, about half of the price she would have paid in Sweden.
So far Wålsten is satisfied with her decision to get braces. She has also convinced several friends to do it too.
“They all look really good,” she says.
Url copied to clipboard!