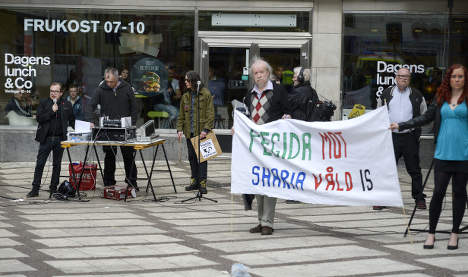 Police said that the Pegida gathering attracted only a handful of listeners, while 250-300 anti-Pegida demonstrators showed up at Forum Square in Uppsala to voice their opposition to the anti-Islam organisation.

Two of those who spoke at the rally were was the gallery owner Henrik Rönnquist, the founder of the Swedish branch of Pegida, and street artist and provocateur Dan Park – both previously convicted of incitement to racial hatred,

Police spokesman, Jonas Eronen, said that it had been a quiet afternoon and that “there were no arrests at all.”

Pegida (Patriotic Europeans Against the Islamization of the Occident) rallies began in the German city of Dresden last year with several hundred supporters and snowballed to reach 25,000 people on January 12th.

But numbers have fallen since the movement's founder, Lutz Bachmann, stepped down on January 21st after a picture surfaced of him posing as Adolf Hitler. Other senior figures have also since resigned.

Previous Pegida rallies in Sweden have attracted very little support – at a rally in Linköping in March only four Pegida protestors turned up to support the right-wing group. There they were also vastly outnumbered by anti-Pegida demonstrators.