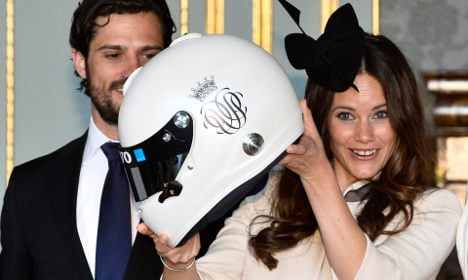 A motorcycle helmet was among the wedding gifts for Prince Carl Philip and Sofia Hellqvist. Photo: Claudio Bresciani/TT

The Swedish parliament and government handed over a kayak for two people as a wedding gift on behalf of the people of Sweden on Sunday.

“I know that the couple appreciate both nature and exercise and kayaking is a delightful way of enjoying nature. It's a little bit like sneaking out into nature without bothering anyone – quietly and close to the water. A two-person kayak also encourages cooperation, which is a good thing for all relationships,” wrote Swedish Prime Minister Stefan Löfven in a message to the royals. Swedish automobile giant Volvo Cars gave Carl Philip, whose love of motor sports is well known, and his bride-to-be a motorcycle helmet, causing the prince's eyes to light up.

Älvdalen municipality, where Hellqvist grew up, handed over a brand new electric guitar of the famous Hagström brand as well as a locally designed candlestick, a traditional Swedish wooden horse figurine and a book on Elfdalian wedding traditions. The book was presumably written in Swedish, and not in the historic Viking language still spoken in Älvdalen today, which The Local wrote about earlier this month.

The couple also received a stuffed toy lion from the Lions charity, a nature reserve in the Värmland region, and a resting stop for weary hill walkers at a hiking trail in Dalarna. The service, called the “lysning” or “publishing of the banns” in English, is a public announcement of an upcoming marriage that was originally meant to allow anyone to raise canonical or civil legal objections to the union. It arrived in Sweden in 1200.

The practice stopped being obligatory in Sweden in 1969, although it is still adhered to by the Royal Family. The services were held before the marriage of Crown Princess Victoria and Daniel as well as before Madeleine and Christopher O’Neill’s wedding.

Despite the royals’ love of tradition, there are some aspects of the “lysning” that have been jettisoned. A few hundred years ago, it was common for the bride-to-be to go through the streets in the afternoon begging. Instead, the couple accepted their gifts in a gathering in the Royal Palace for invited guests after the service. Representatives of Lions present the royal couple with their wedding gifts. Photo:Claudio Bresciani/TT

Also on Sunday, it was confirmed by the Royal Court that King Carl XVI Gustaf will confer the official Princess title on his future daughter-in-law.

The royal wedding itself will take place on Saturday, June 13th, also at the Royal Chapel, starting at 4.30 pm.

Carl Philip has dated Hellqvist since January 2010. She is a former fashion model and former reality TV star. The couple met in 2009 at a club in Stockholm's posh Stureplan district. They have lived together on the island of Djurgården since 2011.