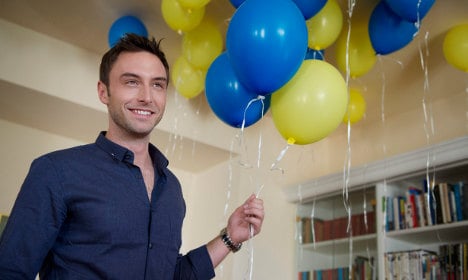 Europeans across the continent are set to gather in front of their television screens and laptops to watch as the Eurovision Song Contest final takes place in Vienna this weekend.

In Sweden, all eyes will be on Måns Zelmerlöw when he takes the stage as the 10th act in the line-up on Saturday, May 23rd. The Swede sailed through the semi-final with his 'Heroes' on Thursday.

But who is the young artist? As it's one of Sweden's most-watched television shows, you will simply not be able to avoid Eurovision this week. So, to help you along the way, we have compiled a list of all the things you need to know about Sweden's entry.

What's the lowdown on the singer?

Måns Zelmerlöw is a 28-year-old pop singer from Lund in southern Sweden. He first entered the limelight after coming fifth in the Swedish Idol 2005 competition and winning the Strictly Come Dancing-inspired competition Let's Dance a year later. Zelmerlöw then made a name for himself starring in various musicals and hosting the ever-so-popular Swedish sing-a-long show Allsång på Skansen from 2011 to 2013. Is this his first time in Eurovision?

Yes, but this is a touchy topic. Zelmerlöw was widely tipped to win Melodifestivalen – Sweden's competition to choose the country's Eurovision entry – back in 2007 but stumbled at the final hurdle, ending up in third place with 'Cara Mia' (a catchy pop tune which interestingly later went on to become something of a modern cult classic in Sweden). Two years later he was again one of the favourites, but lost out to opera singer Malena Ernman and dropped to fourth place with his 'Hope and Glory'. It was third time lucky for Zelmerlöw this year, who now hopes to take over the Eurovision title from last year's winner Conchita Wurst.

So, is he likely to win?

Actually, he's one of the favourites among the 40 countries competing, if the bookies are to be believed. Search engine Bing presented its own statistics naming Sweden as the top favourite with a 17.2 percent chance of winning (compared to predicted runner-up Russia at 13.6 percent). However, he faces some competition from Italian tenor group Il Volo and Guy Sebastian of Australia, which will be entering as part of a special 60th anniversary edition of the contest.

But Zelmerlöw has certainly created a buzz in Vienna, not least thanks to a saucy press kit featuring an image of him wearing only underwear released last week. At Sunday's opening ceremony the Swedish artist spent several hours being interviewed by international media on the red carpet.

Is his song really as good as all that?

It is pretty catchy and the feelgood uptempo Heroes, by songwriter Anton Malmberg Hård af Segerstad, has certainly been making the rounds in Stockholm's clubs this spring. But most of all it was Zelmerlöw's stage show that no doubt played a part in his sweeping victory in Melodifestivalen. In the act, the singer interacts with a series of digital effects surrounding him – even landing a fist bump perfectly with… yes, you read it right, a digital gnome.

It is worth noting that the performance has not been completely uncontroversial and Zelmerlöw's gnome army has been accused of plagiarism, leading the singer's crew to tweak the background digital effects ahead of tomorrow's competition.

Yes, and some commentators think this may count against Zelmerlöw's chances of winning. Sweden is one of the most successful Eurovision competitors, with previous winners including Abba in 1974, the Herreys brothers in 1984, Swedish icon Carola in 1991 and Charlotte Nilsson with 'Take Me to Your Heaven' in 1999. More recently, Sweden saw young star Loreen take home the heavily sought out award for her song 'Euphoria' in 2012.