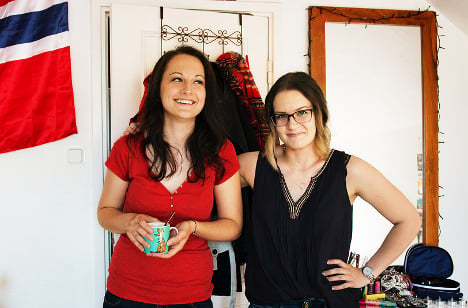 It’s cold, wet, over-priced and the natives – for anyone who has ever visited – appear as about as reserved as you can get. It hardly sounds like student paradise, does it?

But what’s the truth about studying in Sweden? Eavesdropping on a conversation between two Malmö University international undergraduates might just be the best way to find out.

Jenni Uimonen from Finland and Karolína Marcinová from Slovakia share an apartment. Both arrived last summer and both are in their first year of Malmö’s International Relations bachelor’s degree.

We dropped in for a chat about how they navigated the challenges of student life in a new country.

Finding a place to live

There are 2,000 student apartments peppered throughout the city, and both fee-paying and exchange students are generally guaranteed accommodation. Still, the vast majority need to find their own place to live, and that’s exactly what Jenni and Karolína had to do.

“I think it’s hard anywhere you go, anywhere there is a big city and a university. I have friends studying in the bigger cities in Finland and it is not easy for them either. I think I sent between 30 and 50 emails, and for every ten emails you send you get two responses – one of those is a ‘no’ and the other a ‘yes, maybe’. It does require your time and effort,” warns 21-year-old Jenni.

She searched the websites Hemma and Blocket, before sealing the deal and moving into the upstairs apartment of a shared house. Below them live a Swedish couple and three children (their landlords) and in the basement, another apartment with four students.

At home with Karolína (left) and Jenni. Photo: Martin Magntorn

“I understand why some people would be worried about renting to someone they had never met, but our landlady had a smart solution and would just have a conversation with us on Skype. A chance to find out if we were ‘normal’! And we also got to know her, to see if she was ‘normal’ too,” adds Karolína.

Jenni agrees: “There is always a risk when you live with someone that you don’t really match with them, but I think that is one thing our landlady does. I think she has some kind of idea of putting like-minded people together.”

How you perceive life in Malmö as an international student may differ depending on where you’re originally from. For Jenni, life here is not so different from life in her native Finland.

But coming from outside of Scandinavia, 20-year-old Karolína reflects:

“I always wanted to move away from Slovakia, at least for my studies. With time I started learning things about Sweden. It was always about its awesomeness, how it was economically and socially advanced. This is the attitude that other European countries have to Sweden.”

Karolína admits that she applied for other countries too – before emphasising that Malmö was her first choice.

“I didn’t really know it was such an international city before I came here, but it didn’t really bother me if I was talking English to German and Turkish people, or to Swedish people.”

And that variety is what Karolína loves about living in Malmö: Jenni says she was already aware of the cosmopolitan make-up of Malmö and that this, indeed, was one of the reasons she accepted the place at the university.

“I noticed that something like half of the city is under 35 and one-third is of non-Swedish origin. It’s hard to imagine what that would be like and how international it is before you get here.”

So the Finn, the Slovak and their third housemate, a Dane who is also studying at Malmö University, stuck together as they got to grips with their new stomping ground, finding their way around and filling out all the ‘I am moving to this country’ forms.

“It was a super-smooth transition, at least for me,” says Jenni.

“My friends and family back home were saying ‘oh my God, you already have friends after half a month!’”

Karolína says that despite moving further from home than Jenni, she has not experienced a culture shock in Malmö as she was already in contact with many international people.

“I knew how it might be, but if I compare my life here to my friends’ lives back in Slovakia it’s a huge difference,” she adds.

Living on a budget

The students quickly worked out how to survive on a budget, getting tips on the cheapest places to shop.

“I was really surprised by how many second-hand shops they have here. I’ve just started a challenge on Facebook where you don’t buy any new clothes for a year and I’m not sure I would have done that in any other city!” laughs Jenni.

Sweden has a reputation for being expensive. But, according to Karolína, if you want to live on a budget and save money while food shopping, then it is possible in Malmö – you just have to look and ask around.

Jenni’s top tip is to get a bicycle when you move to Malmö – although she does confess to giving up the ride to university when the weather is just a little too wet and wild, much to Karolína’s dismay:

“I just wear a raincoat and hat!”

Are you looking for a university degree in a truly international city? Are you curious about student life in Malmö? Meet more of Malmö's international students and alumni and find out how to prepare for a move to Sweden.