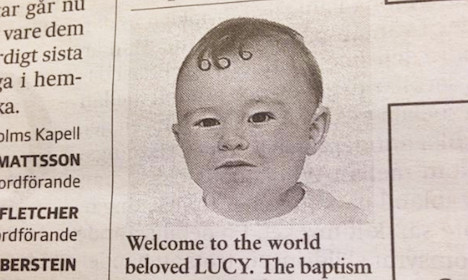 Who is this Lucy with the lovely curls?

With the number of the beast resting cutely on her forehead, suspicions abounded on social media that little Lucy might in fact be named after Lucifer, the Devil before the fall.

The email address appended to the notice in the Svenska Dagbladet newspaper poured further fuel on the Hellish flames. Read backwards, in the best Satanic tradition, the child’s guardian seemed to be none other than Satan’s mother.

And what could RVSP mean? A simple typographical error – a mixing-up of the middle letters – or was it something more sinister?

Worshippers of the dark side might have been tempted to turn up on May 23rd for the nightmare at Elmsta, a village of 1,000 souls just north of Stockholm.

But, as it emerged later in the day, the notice was in fact a piece of guerrilla marketing for the Elmsta 3000 Horror Fest, a horror movie festival.

The sneaky ad marked the second time in a week that the same newspaper fell foul of a jokester. Or maybe it was human error, but at any rate a large-lettered ‘penis’ leapt out at readers of Sunday’s paper.

The end times are nigh.