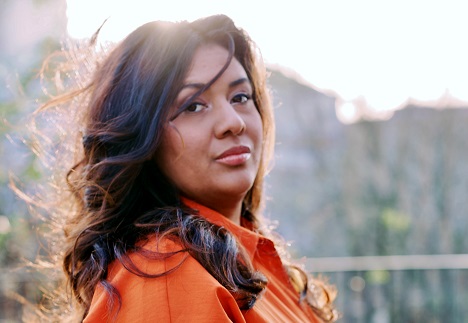 But when The Local meets the Swedish singer-songwriter in a cosy cafe on Stockholm's Södermalm, she's more focused on her upcoming trip to Cuba.

“It's a 13-hour journey; you fly first to Panama and then Cuba,” she says. “You need a lot of patience but it works.”

As a singer, Amparo has travelled a great deal, touring throughout Europe as well as places like Gambia and Vietnam.

“There's nothing logical about the routes,” she remarks, adding that unless you're willing to pay big bucks, multi-legged trips are the default.

“I end up making compromises, but it's fine. In the music business being able to travel is very important,” she says. “It's also how you learn. So of course it would be better to have better connections.”

But jetlag or no, the 31-year-old vocalist is thrilled about the opportunity to travel again.

“I have never travelled as little as I did during Melodifestivalen, since you need to be in the same spot,” she laughs, eager to embark on her Cuban adventure.

But it was still a priceless experience.

Amparo's song “I See You” performed well in the Swedish song contest, making it to the Second Chance round before being ruled out.

“It was an adventure! Performing in Melodifestivalen has been a dream of mine since I was small. It went really well and got me other gigs.”

But even on vacation, Amparo will be tuning in to the Eurovision Song Contest finals on May 23rd to see what happens.

Amparo was also part of the jury on the Swedish TV programme “Inför Eurovision” (Before Eurovision), where she and others listened to all of the songs in the contest – and Amparo says Sweden’s Måns Zelmerlöw really has a chance.

“The final is going to be great. I think it will be either Australia or Sweden,” she hints. “Though I love Spain's song as well. It's in Spanish and I love that. It makes me happy when people use their own language.”

But with 27 different nations participating in the contest, Amparo notes that there are not-so-good entrants – and that the general feel of the contest is hectic, for a good reason.

‘The world is nervous’

“There's a lot going on. You can feel that the world is very stressed,” Amparo reflects. “Almost every song has a little bit of everything – rap, techno, hip-hop, pop.”

It's a concerning trend that the singer says is visible not just in music but in culture in general, all around the world.

“The world is nervous, and it shows in culture as well,” she says. “The political situation is frustrating, here and abroad, and we can't ignore what's happening in the world. And people get stressed. And I get stressed because people are stressed. We can't focus anymore.”

Read more in the ConnectSweden series

As Amparo sees it, a song that mixes genres helter-skelter is simply another reflection of a frightening paradigm shift in which people can't focus on, and thus appreciate, anything.

People use programmes like Spotify and thus have a world of music at their fingertips – but they only listen to 30 seconds of a song before changing.

“If you had all the books in the world and just read one page of each, you wouldn't be any wiser,” Amparo remarks. “But if you had five books for ten years and read them again and again and again, you would new things each time. It's no wonder we're stressed.”

Time to get nerdy

Sweden's music scene has fared relatively well despite stress, nerves, and Americanization. Music is still one of the country's top exports, and with hit artists like Aviici, Tove Lo, and Robyn, the legacy of Abba doesn't look like it's going anywhere.

“We have a strong pop culture here and people look at us with respect in the culture industry,” Amparo confirms. “Our music business is strong. And it's because we are in a rich country and have that privilege.”

Thanks to good education and a stable society where everyone contributes to the greater good, Swedes have the opportunity to “really get into things,” Amparo explains.

“We have time to get nerdy,” she smiles. “If you live in a country with less economic wealth or a less stable political situation, you may not have those options.”

Sweden also has a strong musical tradition, meaning that when it comes to “nerding out”, music is a clear choice for many Swedes.

“I think maybe it has to do with the language: we speak very melodically,” Amparo says with a laugh.

“We have a lot of choirs here, we have good technique, really good schools, and a strong tradition of having music class in schools. And then of course we have the strong pop movement that came from Abba.”

But it's not all rainbows and Dancing Queen. The true secret to Sweden's musical success lies somewhere much darker.

Vemod is one of those untranslatable Swedish words that is more than a word; it’s a way of life. It's “pensive melancholy,” “tender sadness”, bittersweet nostalgia…all of those and yet not quite any of them. It's the feeling that settles over Swedes at the end of a long, beautiful summer, a sweet form of brooding, reminiscing on good times with a latent fear that they will soon come to an end.

“We have this side that is really dark,” Amparo says. “When you are forced into darkness as we are – literally – and everything around you dies, you die also. And you reach for something… And that's when you create.”

The dark periods are when Swedes are most creative, Amparo says. The need to stimulate the mind becomes overwhelming when locked inside in the dark. Still, “It might be enough now,” she adds with a laugh.

“I would give Sweden more sun if I could. We do need it.”

Taking back the flag

Despite Swedes' creativity, Amparo points out that there are still many people who don't even realize many artists are Swedish – partly due to Americanization, but also due to the Swedish people's lack of pride, and ignorance of tradition.

“A lot of the pop culture, movies, commercials, and everything, are Americanized,” she says. “It's not only Sweden; all of Europe is becoming that way, and it's spreading beyond.”

Amparo worries that true Swedish art – traditions like dansband music, folk songs, and even Pippi Longstocking – may fade away if not actively preserved.

Read also: Hans Rosling: 'No such thing as Swedish values'

“We have beautiful traditions here in Sweden, but since we don't talk about why we have them, we forget them,” she says.

Amparo meets many children through her work, and says she fears that they are losing their own culture without knowing it.

“I realized that these children know more about American pop culture than about Swedish culture,” she says. “We have our own traditions, our own folk songs, and tales of tomtar and trolls. But we don't speak about it anymore; we teach them English songs.”

It may be unavoidable that children are inundated with American culture through music and TV. But Amparo says there's more to it than that.

“We don't seem to think we're good enough,” she says. “We are afraid of being proud, proud of our history and our country. It's a shame.”

There's a stereotype about Swedes not being patriotic and not daring to use their own flag – and Amparo says it's true. Many say it began back in the 1990s with the anti-immigration Ny Demokrati party, and that everyone else was afraid to use the flag after that.

“I don't know what happened, but I hope it can be reversed,” Amparo says. “I hope we can take it back.”

Amparo, who was born in Colombia, but adopted by Swedish parents as an infant and grew up in Stockholm, is proud to be Swedish.

“I can say that with my head held high,” she says.

But she has also learned that identity is dynamic, and being Swedish doesn't mean you aren't something else as well.

“When I was in Vietnam they were thrilled to meet me because they all remembered Olof Palme, and how we took their side back then,” she says. “It was nothing about me personally, but it was still a wonderful experience.”

After her trip there with the Swedish Innovation Project, learning about Vietnam and getting to know the people and the culture, Amparo says she has become not just an ambassador for Sweden abroad, but also an ambassador for Vietnam in Sweden. And it goes beyond that.

“I meet a lot of children through work and I want to be able to understand them,” she says. “I don't just represent Colombia. I represent every person who doesn't have a figure who looks like them here except me. It's a gift when someone relies on you like that, and you have to take responsibility.

As an adult Amparo met her biological mother, and her trip to Cuba is her fourth time visiting Latin America.

“When I travel people always ask me where I'm from because of how I look,” she says. “But I get in because I'm Swedish. We have strong passports.”

And rather than “fitting in” on the streets of Colombia, Amparo says she stands out.

“You can spot me on the street,” she laughs. “I am so Swedish. I stand in line. You can see it in my behaviour and my eyes.”

But as she continues to visit Latin America and is now starting to record songs in Spanish, she says she feels a closer connection to the culture.

“It's important to know where you come from, and even though I am Swedish, I do have roots there and I have a family there,” she says.

Amparo adds that she does her best to actively be Swedish-Colombian, by translating her lyrics into Spanish as well as by travelling to Colombia and being aware of what is happening there.

“And I think I will feel more Colombian the older I get,” she says.

But when all is said and done, it's not a choice. It's a sampler, a smorgasbord, a beautiful salsa, not an either-or. And whether it's through flights or music, Amparo's dream is to connect the two.

“If I could I would have the Swedish country together with the Colombians, together, surrounded by flowers,” she exudes. “We have so much to learn from each other. That would be my life goal… to connect them.”