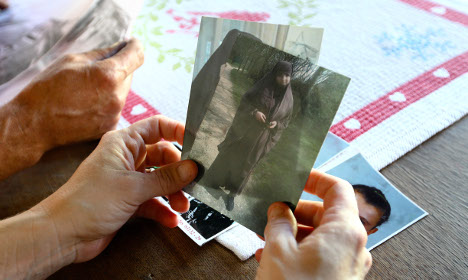 The problem is not confined to Sweden. Here Severine Ali Mehenni holds pictures of her daughter Sahra who left France to join jihadists. Photo: AP/TT

The targets are groomed, usually by other women. Recruiters start by targeting girls who seem vulnerable.

They might display serious conservatism and religiosity for example and can be manipulated into believing a romantic image of Islam, glorifying the afterlife and the heroism of mujahids, or fighters, who might later become shahids, or martyrs.

There’s also the whole issue of sex appeal. Some young women look up to the fighters like pop stars. Then there are others who are more ideologically motivated.

The recruitment often starts online, with girls contacted via Facebook. It sometimes starts with questions about whether they are married.

The conversation might then move offline when recruiters might invite the girls to take part in small study groups with like-minded women.

There are lots of different sources targeting the girls and young women. All the recruitment is done through Swedish, but some of the recruiters are working from places like Raqqa in Syria while others are on the ground in Sweden.

For a lot of the girls this is a form of emancipation in a perverse way. They think they are getting away from the leash of patriarchal structures in their families or the areas where they live.

What better way to give the finger to society than to join Isis?

How many Swedish women have left to fight with terrorist groups in the Middle East?

There are growing numbers leaving and we’ve seen an increase over the last year.

There are more than 30 in all, but that figure doesn’t tell the whole story since it just covers people who have gone voluntarily. A lot of girls and boys are also brought along by parents. Some children are born in Raqqa.

We also had one case last year where six or seven girls from Somali families in Järva in Stockholm all left together. Most of the girls being recruited have left from Stockholm and Gothenburg.

One of the earliest cases we saw was that of a Swedish woman, known as Faten Umm Fida, who was married to the British jihadist Ibrahim al-Mazwagi. They had a child before he died in battle in 2013, and she is now very active in recruiting other Swedish women from her base in Manbij in Syria.

What can Sweden do to stop would-be foreign fighters from leaving?

The authorities hear things. You would think these things were hidden in the undergrowth but people talk and it becomes an open secret when someone’s planning to go. Now recruitment even occurs in the open and it's pretty well known who you should go to for recruitment.

If the girls are under 18 the authorities can and do intervene. But if they’re over 18 there’s not a lot anybody can do.

The under-18s can be temporarily placed in care, or Sweden can refuse to issue a passport. But these legal means don’t work for over-18s.

Is enough being done to combat recruitment?

I’m pretty pleased with how things are developing in Angered in Gothenburg and in Örebro. Specific interventions are working bottom-up to firefight.

I see a lot of criticism of the municipalities for being too soft but they’re the ones that need to do the prevention work. They can leave the more repressive side of things to the police and security services.

One needs to view prevention through a security perspective. It's better to have contact with them than to have live, walking hand grenades moving around without supervision.

That being said, there is a very uneven response across cities. It’s difficult in Stockholm where it’s very spread out and there are lots of different municipalities involved.

Malmö is not doing so much. They need to cooperate a lot more with Copenhagen where there are several radical mosque environments just half an hour away.

What happens when they decide to leave Sweden?

They’re told how to travel, what to do and where to hide.

First they are directed to safe houses in Turkey. There are separate guest houses for men and women in Reyhanli on the border with Syria.

They also meet with their facilitators in Turkey. Some of these facilitators are only in it for the money and loot the women's possession as soon as they've sent them on their way.

Once they get to places like Raqqa and Manbij in Syria they are relatively quickly married off. The younger ones are more likely to be be pushed into temporary one-day marriages, where they are effectively passed around between different men, almost like the Yazidi slaves captured and raped by Isis fighters.

Others, usually the older ones, marry and are OK. They settle and have children. Then there are special kids’ camps where they are indoctrinated, maybe taught to handle light weapons, and sometimes made to participate in horrific propaganda videos.

Children are also very much encouraged to listen in on their parents. Isis have created child spies who they pay for information. It’s a Stasi-like culture of fear.