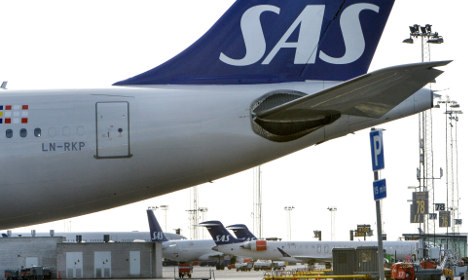 A potential strike deadline has been extended to 8am. Photo: Johan Nilsson/TT

Pilots' unions had previously warned they would strike from midnight, but the deadline was extended to 8am on Thursday as talks continued throughout the night.

“Negotiations will go on up until then,” Rebecca Rosenvinge, press coordinator at pilots' union SPF, said in the early hours of the morning.

But just before 9.30am, an hour-and-a-half after the new deadline, SAS announced that they had signed a one-year deal with the pilots.

“We are pleased to have entered into a new agreement and that we avoid a strike in Sweden. We will now do everything we can to ensure that our customers are able to fly as planned and receive their expected level of service,” said SAS chief executive Rickard Gustafson in a press statement.

SAS has signed a new collective agreement with the Swedish Pilot Union (SPF). No strike among Swedish pilots: http://t.co/26FBSvau9F

“It has been a very long process and we are now pleased with a deal that will protect our members' jobs. Together with SAS we have finally managed to bring very tough negotiations to a resolution,” said Peter Larsson, chairman of SPF.

Strike or no strike, the conflict was already set to cause travel chaos for many Swedish passengers on Thursday. As early as Wednesday, SAS cancelled 110 flights in anticipation of the strike, affecting around 11,000 passengers.

The cancellations affect mainly domestic flights, but a number of departures to the rest of Europe and a few other parts of the world have also been dropped for Thursday. This means that ten percent of today's 1,070 planned flights will not take off. SAS has previously said it wants to simplify the current, very detailed, contracts. The company also wants greater flexibility to appoint seasonal workers. Current staffing levels are adapted to the summer season, when the airline carries more passengers, which creates higher costs during the not as busy winter months.

The company penned a deal with the Danish pilots' union in March and said its ambition was to sign similar agreements with its Swedish and Norwegian pilots. In Norway six pilots went on strike early on Thursday morning, as negotiations separate to the ones in Sweden broke down.

Earlier this year, both SAS and Norwegian pilots walked out in Scandinavia to protest their wages and conditions.