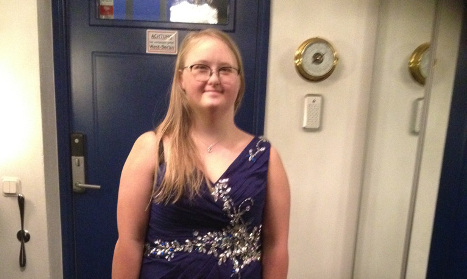 Sofie Ruther wearing her prom dress. Photo: Private
Sofie Ruther, who lives in Hjärnarp in southern Sweden, was set to go alone to her high school leaver's ball next month but will now be arriving with Mathias Tjärnqvist, a former international hockey star who lives in her home town.
The player is even set to coordinate his outfit with the teenager's navy blue ballgown and to drive her to school in a convertible.
“To experience the prom again is fantastic fun, there was no doubt [in my mind] when I was asked,” Tjärnqvist told regional newspaper Helsingborgs Dagblad (HD)
News of the future date was among the most read stories in Sweden on Thursday afternoon, as it emerged that the fairytale matchmaking had been arranged in secret by the girl's father Joakim Ruther, who got to know Tjärnqvist when Sofie was a child.
The player, now 36, used to babysit for the family and regularly sent them postcards from the US when he played in the National Hockey League (NHL), but Sofie was unaware that her dad had requested he accompany her to the ball.
“It's always special going to the prom but to be escorted by a star makes it even more special,” Ruther told The Local.
“Mathias and Sofie first met when she was five, now they say hi when they meet on the street,” he continued, explaining that he was so grateful for the player's help that he wanted him to win a “Nobel Prize for kindness”. Mathias Tjärnqvist playing ice hockey in 2013. Photo: Andreas Hillergren/TT
Sofie was at school on Thursday afternoon but earlier told HD that she thought Tjärnqvist was “nice, kind and sweet” and hoped that it would be “fun and exciting” to attend the prom with him.
The ball is set to mark the start of an eventful summer for Sofie, who will begin an internship at a restaurant in Malmö following her high school graduation.
About one in 800 children born in Sweden every year has Down's Syndrome, a genetic disorder typically associated with mild to moderate learning difficulties and delays in physical growth. While many people with Down's Syndrome experience health problems, around 80 percent of people with the disorder currently live until they are 60, with most adults obtaining some kind of work, according to the European Down Syndrome Association.
Asked about the media attention surrounding his actions, Sofie's father said: “So many have got in touch with us and they all think that Mathias is fantastic.”
“It's touching,” he added.
Url copied to clipboard!