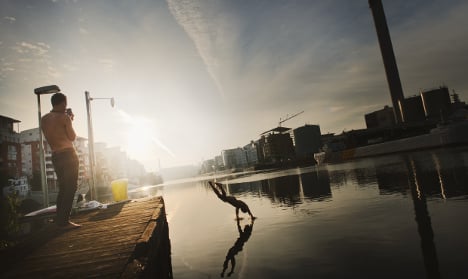 A swimming spot in Stockholm. Photo: Viktor Gårdsäter/Image Bank Sweden
While Sweden has a reputation as one of the cleanest countries on the continent and Swedes have a reputation for jumping into the sea the moment the sun comes out, the nation offers some of the poorest quality coastal bathing water in the EU, according to new figures.
Water was tested at 245 seaside bathing spots across Sweden in 2014 for the European Environment Agency, which reported on Thursday that 5.7 percent of those locations could be classified as having 'poor' quality water.
The figures suggest that Sweden is among the top three worst performing EU member states for swimming sites on the coast. Neighbouring Baltic nation Estonia came out last, with 7.4 percent of tested beaches and other shoreline areas labelled 'poor', with Finland reporting a figure of 6.2 percent. The EU average was just 2 percent.
Meanwhile neighbouring Denmark was celebrating its highest water quality score in history, with just 1.6 percent of its beaches classified as 'poor' and 97.6 percent of the country’s total sea and lakeside swimming spots living up to the minimum requirements of the EU’s Bathing Water Directive.
“The quality of Denmark’s bathing waters continues to increase year after year. It is extremely positive not only for those of us who love to take a dip in the waters but also for tourism,” Denmark's Environment Minister Kirsten Brosbøl said.
The European Environment Agency said that Sweden's low scores were partly down to the fact that it was among several countries which “had a large share of bathing waters where quality classification was not possible because the waters were newly opened; closed; not yet assessed due to changes; or because the required amount of samples for assessment had not been provided”.
However the poor result could be bad news for Sweden's tourism industry, which is working to attract record numbers to the country at a time when the weak krona offers the best exchange rate in years for British and American visitors.
The Local has contacted Sweden's Public Health Agency (Folkhälsomyndigheten) for comment.
Sweden's Marine and Water Authority told the TT news agency on Thursday that it was unclear why higher levels of bacteria had been discovered in some areas.
“There are many local factors at play,” said spokesperson Katarina Vartia, adding that birds and heavy rain could have brought germs to Swedish waterways.
“One thing we thought of is that the summer was hot last year, with many bathers. The bathers themselves can be polluting, as anyone who has kids knows,” she said.
Accross Europe, 98.8 percent of beaches now reach the minimum quality standards established by the EU's Bathing Water Directive, a similar percentage to that achieved in the 2013 bathing season. The share of coastal bathing waters with excellent quality in 2014 increased by 0.3 percentage points compared with the previous year, from 85.2 percent to 85.5 percent.
The EU has been monitoring the quality of swimming spots since 1976, as part of efforts to protect both public health and the environment.
The full list of Sweden's 'poor' quality coastal and lakeside swimming spots
Bollnäs: Karlslund
Falkenberg: Ugglarps norra camping
Gothenburg: Lilleby
Gothenburg: Sillvik
Gothenburg: Tumlehed
Helsingborg: Fria bad
Helsingborg: Vikingstrand
Höganäs: Margreteberg
Kristianstad: Snickarhaken
Kungsbacka: Sörvik
Lomma: Hamnhusen, T-bryggan
Malmö: Sibbarp, barnviken
Nynäshamn: Nickstabadet
Stockholm: Maltesholmsbadet östra
Sölvesborg: Hälleviks strand
Varberg: Björkäng