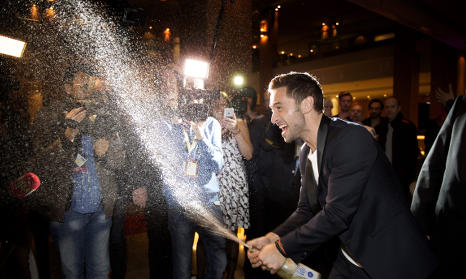 Zelmerlöw won Sweden's sixth Eurovision ahead of Russia and Italy, and many newspapers picked up on Zelmerlöw's barb aimed at Russia's anti-gay legislation of recent years. “We are all heroes, and it does not matter who we love,” he said in his victory speech. Both the Washington Post and The Guardian picked up on the jibe.

Norway's Verdens Gang offered a begrudging congratulations. The newspaper's pop critic said, “I would rather have seen someone else on top of the podium. But having said that, there is no doubt that Måns Zelmerlöw made maximum effort during the finals. His show was outstanding and the evening's best.”

Italy's La Stampa recognised the global success of Swedish pop music: “It is no coincidence that Zelmerlöw won. Contemporary dance music is one of Sweden's biggest exports with acts such as Avicii.”

German newspaper, Der Spiegel, was clearly grumpy about the German entry's inability to pick up even a single point. “Zelmerlöw's colourful dance pop was not lyrically deep but the visuals, with the animation, were original. They helped overcome Zelmerlöw's obvious shortcomings as a dancer.”

A newspaper from the other “nul points” nation, the hosts Austria, was rather more complimentary. “His stage show, with his sympathetic animations, was different from the usual Eurovision monotony,” said Wiener Zeitung.

Finally, Eurovision newbies, Australia were warm in their praise. “The night belonged to the 28-year-old, his lively ballad and the simple but effective stage appearance,” said The Daily Telegraph.