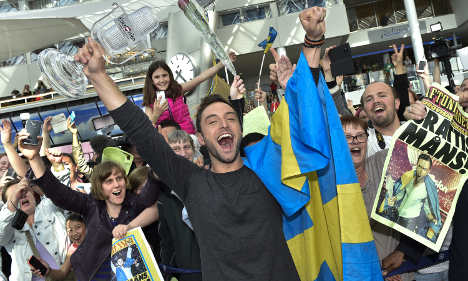 Wrapped in a Swedish flag and clutching his trophy, the 28-year-old was met by scores of jubilant fans at Stockholm's Arlanda airport.

“He's my biggest idol, the perfect son-in-law! He is so good, so professional, and when I found out he was coming today, I rushed here,” a woman in her fifties feverishly told Swedish television channel SVT.

As soon as he reached the arrivals terminal, the Eurovision winner gave in to the crowds, taking selfies with cheering fans, hugging and signing autographs for people, and posing for local photographers.

“I am overwhelmed with emotion. In the plane, everyone started singing 'Heroes',” the winning song, Zelmerlöw told reporters.

“I have slept four hours, but despite that, I feel very happy. I am being fuelled by adrenaline,” he remarked in a separate interview with Sweden's Aftonbladet newspaper.

Landed in Stockholm and was met by a huge crowd, cheering and singing. Thank you all for this amazing… https://t.co/w37hYY1D2e

His song, Heroes, won the competition ahead of Russia and Italy and Zelmerlöw still can’t quite believe what he has achieved.

“When you consider that Eurovision has been going on for 60 years and we only had five Swedish winners until now, then it becomes very apparent that this is great,” said the singer.

When he awoke after his short sleep he said he initially forgot that he’d won.

“At first I was angry because I slept so few hours. Then I started to wonder if it was a dream because everything was foggy. Then I saw that I had 500 text messages and realized that, no, it was not,” he told Aftonbladet.

Zelmerlöw said he planned a quiet Sunday night before getting back to work: “It will be nice to go home to my dog and sit on the couch with a pizza and just reflect.”

He later tweeted a photo of his pet having a nap next to his trophy.

The singer is set to perform at Stockholm's Gröna Lund theme park on Friday night.

Meanwhile Sweden is continuing to celebrate the heartthrob's win.

Even the prime minister welcomed Saturday night's victory, which came 41 years after ABBA won with its classic 'Waterloo'.

“Congratulations Måns! A fantastic performance. You are now the hero of all Sweden! Next year, we will welcome the whole of Europe here. Celebrate well, and I will call you on Monday to congratulate you,” Prime Minister Stefan Löfven wrote on his Facebook page.

Three years after holding the contest in Malmö in southern Sweden, the Scandinavian country will now prepare to host thousands of contest fans again next year.