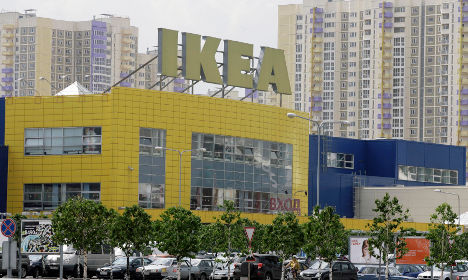 According to Russian newspaper Izvestija, the Moscow-based veterans' organization has written to the speaker of the Duma, Sergey Naryshkin, urging members of parliament to take immediate action against Ikea and its founder Ingvar Kamprad.

The group takes issue with the Swedish furniture company's plans to build another shopping centre in Moscow suburb Mytisjtji, which would see Ikea's iconic blue and yellow store set up near a federal cemetery for war veterans.

The burial place is home to, among others, Mikhail Kalashnikov, who invented the assault rifle with the same name.

“What blasphemy,” writes the group. “Practically on their bones is a huge complex for shopping and entertainment being built.”

Ikea's founder Kamprad has come under fire for Second World War-related activities before. A few years ago it was revealed that the Swedish billionaire was a member of a Nazi organization in his youth, a fact for which he has apologized several times since.

But the Russian veterans have not forgotten, and take particular offence to the businessman being awarded the Russian Order of Friendship for his contribution to Russian-Swedish trade back in 2011, which they argue should be revoked.

“Ikea seems to deliberately destroy our places of military glory,” they write, claiming that this is because Kamprad “symphathizes with Adolf Hitler's views” and is “a supporter of racial theory”.

Ikea, which currently owns 15 stores in Russia, is seeking to expand and is reportedly eyeing a site near Volgograd, former Stalingrad. The veterans strongly resent this, writing this would be in the exact location of a tractor plant which was a key site during the Battle of Stalingrad in 1942.

“But today, in times of peace, it may fall into the hands of the Nazis from Ikea,” they write in the letter, which was first reported on in Swedish by the Dagens Nyheter (DN) daily.

It is unclear how much of the parliament's vote they will get, but they have the backing of at least one member, leader of ultranationalist party Rodina, Alexei Zhuravlyov, who expressed his support on Twitter:

“Ikea has great respect for the history and culture of all the countries where the company operates. Preservation of cultural heritage is of utmost importance when selecting sites for construction and the design of new shopping centres,” an Ikea spokesperson told local Russian news website Ura.ru.

The Russian market has become Ikea's fourth largest by sales since the company arrived in 2000. Earlier this year, the Swedish furniture chain revealed it was scouting locations in 25 Russian cities “with a population of over 500,000”, a spokeswoman told DN at the time.

Relations between Russia and Sweden have been strained in the past year, with Sweden's Security Service Säpo stating that the biggest intelligence threat against the Nordic country in 2014 came from its eastern neighbour.