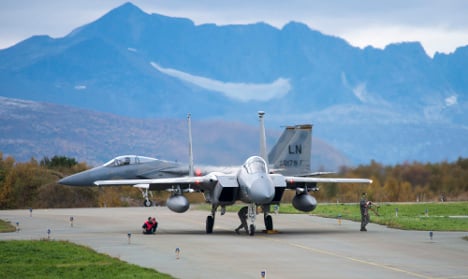 Organised by Sweden, Finland and Norway, the challenge is taking place in the north of the country and will involve around 115 aircraft, with up to 90 planes set to take to the skies at the same time.

The Nordic neighbours will be joined by soldiers from the UK, Switzerland, France, Germany the USA and the Netherlands for the event.

“It gives us an opportunity to exercise with different aircraft types from large composite air forces…tactics and procedures can be practised in a realistic threat environment” said Major General Karl Engelbrektson in a statement in Swedish on the Swedish Armed Forces website.

ACE 2015 is scheduled to run until June 4th and took more than a year to plan.

Military staff from the nine participating countries have been arriving in Luleå in northern Sweden over the past week, where they will be based for the duration of the challenge.

The training exercises will be divided between Bodø in Norway, Rovaniemi in Finland, and Kallax in Sweden.

They will include scenarios from weapon delivery, both against grounded and airborne targets to combating simulated anti-air artillery, to low-level flying and mid-air refueling.

“This is the second time the multinational training exercise is carried out, the first being in 2013. The plan forward is to continue every other year. Even though Norway, Sweden and Finland are the host nations, all of the participating countries contribute to the planning, which helps build our national and allied capability to lead air operations,” said Brigadier General Jan Ove Rygg ACE 2015 exercise director on the event's English-language website.

He continued: “The aim is to exercise and train units in the orchestration and conduct of complex air operations, in close relations to Nato partners. The unique cross border air space makes ACE 2015 a one of a kind training ground for increasing interoperability and skills in all parts of the chain.”

Last week Major General Karl Engelbrektson told a press conference that it was vital for Sweden to hold “large complex exercises with other nations” to enhance the country’s operational capabilities.

Sweden has recently increased defence spending, although there has been strong criticism of the Social Democrat-led government's strategy, with many leading military experts arguing that Sweden would still struggle to defend itself in the event of an attack.